Why France Adores the Citroen 2CV

The Citroen 2CV is a funny looking automobile, but it is also France’s all-time favorite car. Why do the French love this car so much? Why are they almost obsessed with this little machine they call “La Deux Cheveaux” (The Two Horses), or the “2CV” as it is officially designated? Why this 2CV love ?

Warning! This article gushes with enthusiasm. The French and I, love this little car. As an automobile nut, I certainly appreciate all sexy tire-scorching machines from Detroit to Milan, but my favorite automobile may still be the humble little Citroen 2CV. Why? It’s a personal thing, but I am not alone. The 2CV is a “people’s car” that doesn’t pretend to be fancy or cool. It is honest and pure. It is brilliantly engineered and cleverly designed, yet very cheap and simple to own.  It delivers on its purpose, and does so with a large dose of personality and innovation. Like your dog, it is loyal, willing, able, and dependable.  It is extremely economical and utilitarian, but still turns heads. People of all walks and of all ages smile when they see it. This cute little car attracts more smiles per mile than Mustangs or Ferraris, and frankly it is a real hoot to drive. For many like myself, it is 2CV love.

The Citroen 2CV was such a successful design that the car was barely modified over its 40 year history..Millions of them were made from 1949 through 1990. Acceleration was “escargot-like”, but with fuel consumption well over 50 mpg, the 2CV still rivals modern cars, and those in the know covet it as one of the original “green” cars. The 2CV enjoys a cult status. There are thriving owners clubs the world over, and it is considered by many to be the ultimate automotive example of “less is more”. A recent Bonhams Greenwich auction which appeared on the TV show “Chasing Classic Cars”, featured a 1950 2CV.  Perhaps the oldest 2CV in America, it fetched $33,000 which is a very respectable wad of dough for a car that used to cost $300!

Before WWII Citroen realized that France was in need of a vehicle that could basically replace the farmer’s horse. The war delayed the project. Citroen refused to reveal plans to occupying forces, but development continued in secret. Legend has it that a lovely Secretary for Citroen helped to divert the attention of an Officer in charge of spying on operations. The first case of 2CV love? When it was first shown at the Paris Auto Salon in 1948, journalists ridiculed its appearance; but the car was just what post-war France needed. It was cheap to buy and it quickly became so popular that Citroen couldn’t keep up with demand. With a 5 year waiting list, used models were fetching more than new ones, which Citroen reserved only for farmers, doctors, and priests.  The 2CV proved to be more than the sum of its parts. It did everything it promised. It became part of the family. It became the most familiar car in France. Even movie stars like Brigitte Bardot were seduced. It was 2CV love! 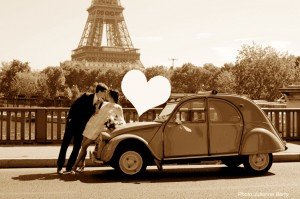 A technical review in British “Autocar” described: “the extraordinary ingenuity of this design, which is undoubtedly the most original since the “Model T Ford”.  Noted automotive author L.J.K. Setright described the 2CV as “the most intelligent application of minimalism ever to succeed as a car,” calling it a car of “remorseless rationality.”  The excellent VW Beetle was the most successful “people’s car” since the model “T”, but it is interesting to note the Citroen is better in many respects such as overall efficiency of weight, space, and fuel consumption. The 2CV is roomier and has a nicer ride. The VW only has 2 doors, and it’s more conventional chassis cannot tread in terrain that the 2CV navigates without effort. From mountain peaks to desert valleys, the 2CV broke many world endurance records and was frequently seen in colorful adventures trudging across the globe.

Tintin was a fan :

Doubters (those who don’t understand the 2CV) seeing the low horsepower specs, or how the car can lean dramatically, assume the car might just tip over in fast turns. How wrong they are! Citroen promised a large reward to anyone who could tip one and nobody ever did. It’s a testament to the completely unorthodox suspension design (vive la difference) with flexibility that ensures excellent road manners both on and off-pavement. In fact the car is quite surefooted and holds a tenacious line around corners. Love! Sure, the early models didn’t have pesky luxuries like a gas gauge (simple dip stick), or a wiper motor (wipers were connected to the speedometer cable), but that didn’t stop it from being France’s favorite, and if anything, the lack of things that can break increased its popularity. You can roll the canvas top all the way back to enjoy the sun or the stars, or maybe you need to haul a tall load like a bookshelf or a grandfather clock? The lightweight seats which can be easily removed in mere seconds, can double as comfy lawn chairs. Picnic anyone? 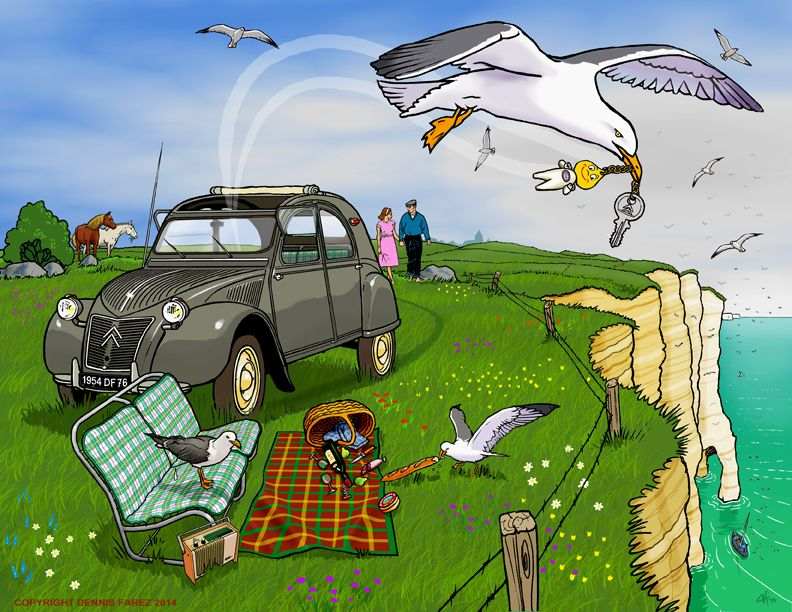 The doors, hood, and fenders can all be removed in minutes. Simple flip up windows replace the need for cranking mechanisms. One lever controls the simple heater and another opens a wide cool-air vent under the windshield. The bullet-proof engine is not a powerhouse by any stretch of the imagination, but it will happily run flat-out all day long. With no belts to snap, distributor to fry, or hoses to burst, the air-cooled design is a marvel of simplicity and reliability. These clever details add up and they end up charming you. It is also a fun car to drive. Despite its low horsepower, the car is engaging, and the free revving sound of the two-cylinder motor is unique like a happy “weeeeeee”!  Steering is light, and the odd shifter quickly becomes second nature. The amazing suspension soaks up bumps like you wouldn’t believe. The 2CV really is different. It doesn’t look like, sound like, or drive like, anything else on the road. Experience it and you just can’t help but to fall into 2CV love!

2CV Love is shared by many

Citroen cars have always been innovative, including the low slung “Traction” which was the first mass-produced front wheel drive car, and the marvelous “DS” which stunned the world with its futuristic styling and technology.  But the 2CV remains the all-time favorite, and brings owners to talk about the car with excitement and enthusiasm beyond what many of us would consider “normal”.

Corporate mergers, government regulations, and other modern sensibilities finally killed production, but the Citroen 2CV remains a cherished automotive icon. To the French, it is more than just a car… it  is a symbol of “savoir faire”, it is a symbol of France, it is 2CV love! 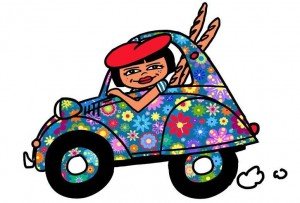 Girl Gone Gallic loves the 2CV (and baguettes too!)

4 comments for “Why France Adores the Citroen 2CV”