A glimpse into Corsica’s tumultuous and complicated past…

You might wonder why, but there is a real reason Corsicans have such a hard edge and are known to bomb enemies, burn homes, and uphold blood feuds.  Corsica’s apparent serenity belies its violent past; Corsicans have had it very rough over the centuries…

Little known are the volunteer Moroccan  forces called the “Goumiers” who played a crucial and decisive role in liberating Corsica of German occupation. These forgotten heroes cleared Corsica of the majority of its invaders in three short weeks, fighting valiantly and ferociously against the enemy forces.  Those that fell into German hands were immediately executed, and yet the Goumiers remained fearless continuing their task of clearing the hills above Bastia and the treacherous “Col de Teghime” of the invaders.

Buried alongside the fallen Goumiers of Corsica is their Christian commander who wished to be buried next to his men, with no signicatif distinction between them.My uncle fought amongst the Goumier in the Algerian War, and has the utmost respect for these people who remain vibrant honorable and brave figures in his memories.

The seven remaining Goumiers received France’s highest award, the “Légion d’Honneur” in 2013 (a bit late in my opinion).

The Corsican flag consists of a white background with “testa Maura” ( head of a Maure) – or figure-head representing a Maure/Moors (or Saracens/Sarrasins) warrior. The Moors were the Berber inhabitants of Maghreb, Sicily, and Malta during the Middle Ages. The first raids by the Moors into Corsica took place in 713 AD. The bandana which originally blindfolded the figurehead is thought to represent the defeated moors. It is interesting to note that Corsica did not choose its own flag, but received it by default during the creation of a 16th century map as it had none of its own. It echoes the nearby Sardinia flag that has the same figure-head, except with four heads and whose meaning is somewhat unclear.   When Corsica tried again to regain its freedom and become independent in 1755, the bandana was moved above the eyes to symbolize clear thinking and the liberation of the Corsican people.

Did you know Ajaccio was Napoleons birthplace ? 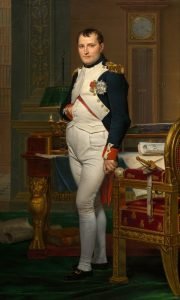 Right downtown in 1769…  His family home is now a museum and is well worth a visit. You may have known that fact, but bet you didn’t know his nickname was “Napoglione Paille au Nez” (Napoleon Straw-in-the-Nose)!  His peers thought he was a stuck up snob in school holding his nose up high in the air, hence the nickname.  “Le Petit Caporal” (the Little Corporal) or “the Little Corsican” are his well known adult nicknames.

At the time of Napoleon’s birth, France had just claimed Corsica as its territory.  His bourgeois family had prestige but little fortune, and fully supported this new alliance. Napoleon was sent to military school in France at the very young age on 9 years old where he was treated as an outsider and bullied. He never was quite able to lose his Corsican accent and only fully grasped the French language in his last years. But even with all this and his tiny stature (or not – at 5’6″ tall he wasn’t actually that far off the French average height of the time – so ignore that myth!) he definitely did not allow anything or anyone to stand in his way!  His complete biography is a fascinating journey well worth further exploration for those unfamiliar the details. Napoleon remains the main and indissoluble link between France and Corsica to this day.  And when you do visit Corsica, don’t forget all those locals are direct descendants and cousins of Napoleon…

Want to dive deeper into the fascinating world of Corsican history and culture?  Check out “Granite Island: A Portrait of Corsica” (1971) or the more mystical “Dream Hunters of Corsica” (1995) both by Dorothy Carrington.  If you missed the first part of the series, check out “Wonderful Magical Corsica“.  Otherwise, stay tuned for Part 3 of the Corsican Series (the photo gallery) coming out soon! 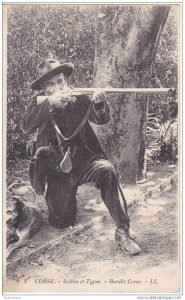 13 comments for “Corsica’s Turbulent Past”