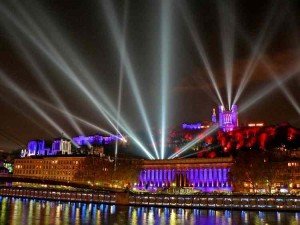 What: La Fête de Lumières / Festival of Lights Lyon – 70 light installations throughout downtown Lyon.  (Not to be confused with the cinema festival in October called the “Le Festival Lumière” from the 13th to the 19th of October 2014)

Where: Lyon, France (Presque-île), with illuminations taking stage on the Basilica of Fourvière, the Place des Terreaux , and throughout the presque-île (almost island).

Why:   It’s pure magic ! Over four million people are expected to participate this year (and they can’t all be mistaken). And for the cherry on top, it’s completely FREE !!!

Who: Artists from all over the world create amazing light shows using high-tech effects such as video, music, and sound effects timed perfectly to dancing images broadcast on buildings, rivers, and parks. Over 70 unique light art exhibitions will be scattered throughout the city center.

How: Book your accommodations ASAP as some hotels are already fully booked. If you like, there are no booking fees through the official Lyon tourist booking center (and they speak English – yeah !):

You can download the free Iphone or Android application from the main website with a map and directions to help you plot a route to the best sites. I have absolutely no sense of direction, and with this app I had no problem to navigate to the sites (other than negotiating the massive crowd). Both the app and the hard-copy guide come out in November. 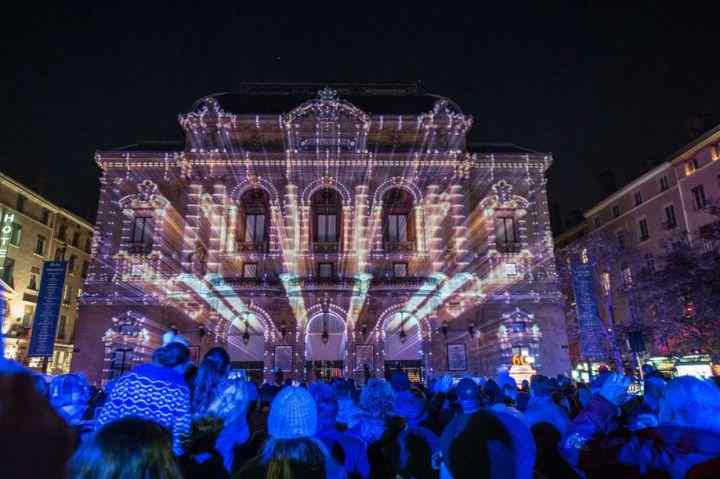 They’re not kidding about the four million visitors, so either arrive super early or just avoid the most crowded times (that’s my suggestion). I would avoid bringing the kids if at all possible just because of the mayhem – if not just be prepared for a little frustration and some cranky kids. From my personal experience, it’s best to arrive in the evening after 8pm when some of the crowd has dwindled away (to put those cranky kids to bed). The busiest day is Saturday, so try to avoid completely if at all possible. Your very best strategy is to have accommodations all within walking distance avoiding the long lines at the metro altogether.

There’s lots to do and see in Lyon during the day before the festivities start:

√  Part-Dieu Shopping Center – It’s a mall, so chain stores, but one of the largest in Europe. I’ve may have been known to spend a few hours there, particularly during “Les Soldes” every January and July.

Here’s a teaser video for you of Lyon to get you in the mood:

If any of you out there in Cyberville would like to join me this year, I have accommodations booked for a group and can provide guide services for those interested – just drop me a note !