Like many things in Christian religion, Epiphany started out as a Roman pagan event. 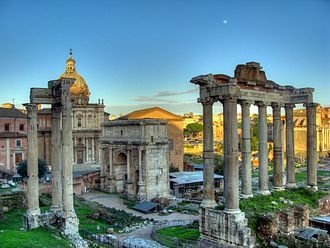 The remaining eight columns of the Temple dedicated to Saturne

Way back in antiquity, in the 11th century, the Romans had the habit of picking their leader by hiding a gold coin into a simple round loaf of bread and letting the finder rule the troops. Thus was born the beginnings of Epiphany back in the 13th century.  The Christian Church used this as their launch point for the tradition that we know today. The coin of course became the « fève ».

Next, to this we add a well-known Roman pagan festival called “Saturnales” celebrated in the heart of winter (similar period of the year as is the birth of Jesus). During the “Saturnales” festival, each Roman family designated a slave as “Saturnalicius princeps” (Master of the Saturnales) – less formally known as “King of Disorder”, or more politely “King of the Day” – thus reversing the role of master and servant.  For that one day, the slave (then King), could ask for anything he wanted.

The  elected slave was the who found a token in their piece of bread. To make sure the distribution of the bread was fair, the youngest of the family would hide under the table and designate to whom each piece should go. Hmmm… Remind you of anything ??? Once the slave was designated Master or King of the Day, a lot of drinking, eating, and dancing followed.Too bad at the end of the day the slave was put to death…

Now take both of these Roman traditions, mix them together (and forgetting the part about the human sacrifices, huge public banquets, partying, and general carnival atmosphere), and you can you have the origins of Epiphany. The Church just used a little creativity to make it work for their purposes.

There you have it, the Fête des Rois history…

Some Fun Royal History around the Galette

Louis III, duke of Bourbon (1337 to 1410), also known as “the good”, had the generous habit of offering slices of Galette for the Fête des Rois containing the fève to the poorest old child of the village. He would then crown the recipient, clothe them in royal attire, give them gold coins, servants, and send them off to school for an education.  If all the kings had been this “good”, I bet there would not have been a revolution !

In 1521, King François 1st (1494 –1547 known as “François of the large nose”) challenged his buddy the duke to a duel. The Duke had drawn the slice of Galette with the fève for the Fête des Rois and mockingly pretended to take over the throne from his friend King François. Such mockery had to be answered with a dual of course.  The battle was fought with hardboiled eggs and flying Galettes. As most riotous play usually ends, an accident ensued…. A lit torch toppled onto the King (the real one), and burned him badly.  The Duke rescinded his claim to the throne.

– “Je serai deux fois roi” or  “I will be King twice over”, chanted the young King Louis XIV (1638 –1715 known as “Louis the Great / Sun King”) hoping to find the fève in his pièce of Galette for the Fête des Rois.  I beet he had much better luck than I ever did…

– It was at this same time customary for the ladies of the court that found the fève in their slices to become “Queen of France” for the day and had the habit of asking the King for “graces et gentillesse” (favors and kindnesses). The King, less than enchanted with this practice soon abolished the custom much to the ladies dismay.

The “Galettes des Rois” was declared anti-government at the French Revolution in 1776. They tried banning it, renaming it “Galette d’égalité” (equality), tried changing the shape to resemble the liberty cap (bonnet phrygien), and even tried calling the Fête des Rois day “journée sans-culottes” or “day without pants” – the French revolutionaries of the lower classes.  All with little success… The ban was short-lived and the Galette reappeared quickly in its original form… Don’t mess with the Frenchies and their food !

In modern times, every year at l’Elysée (the French version of the White House), a huge Galette is baked for the Fêtes des Rois (Epiphany). It measures well over a meter (or about 48 inches) in diameter and easily serves 150 guests. There is one caveat that the pastry chef MUST follow; there absolutely NO fève is allowed. You must remember after all, that the French government could never allow a King to be placed amidst its Republic !!! It would be treason after all…

Practice your French comprehension skills by watching this short video :

Why not try making your own Galette for the Fête des Rois ? 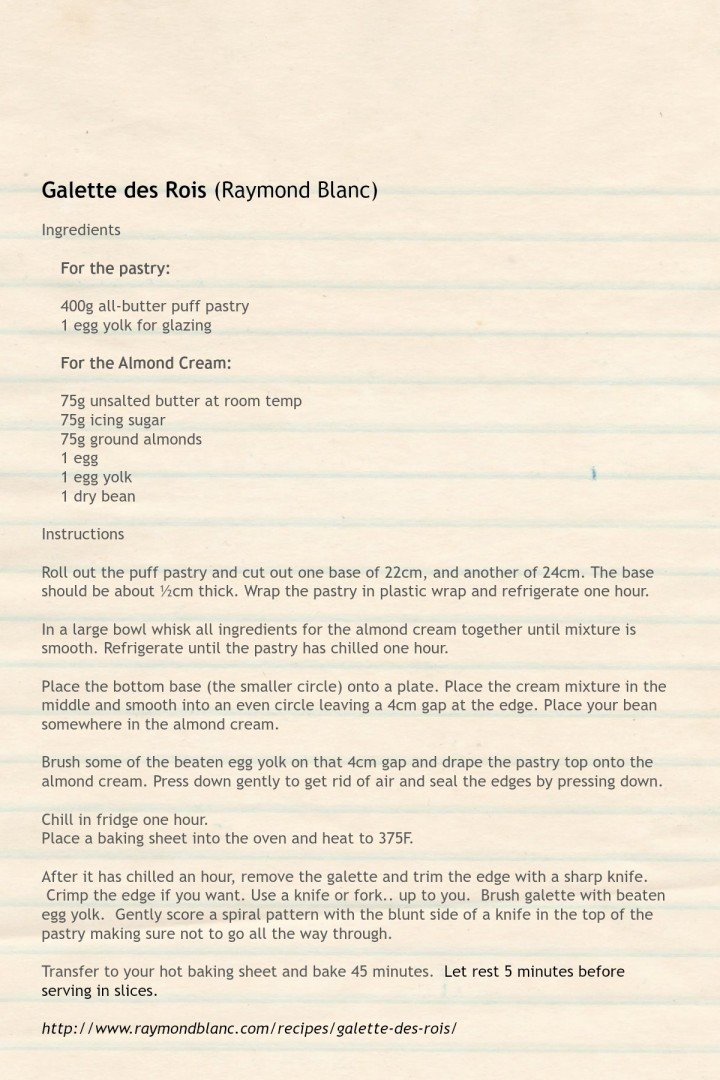 There are even expressions in existence since the 13th century involving the Galette ….