I love seeing their burst of color in the fields and along the roads I routinely travel.  They typically bloom the month of May and start dwindling down come June.  The red poppies grow best in recently disturbed dirt – such as fields harvested or plowed over.  Being in Provence, that means pretty much everywhere! 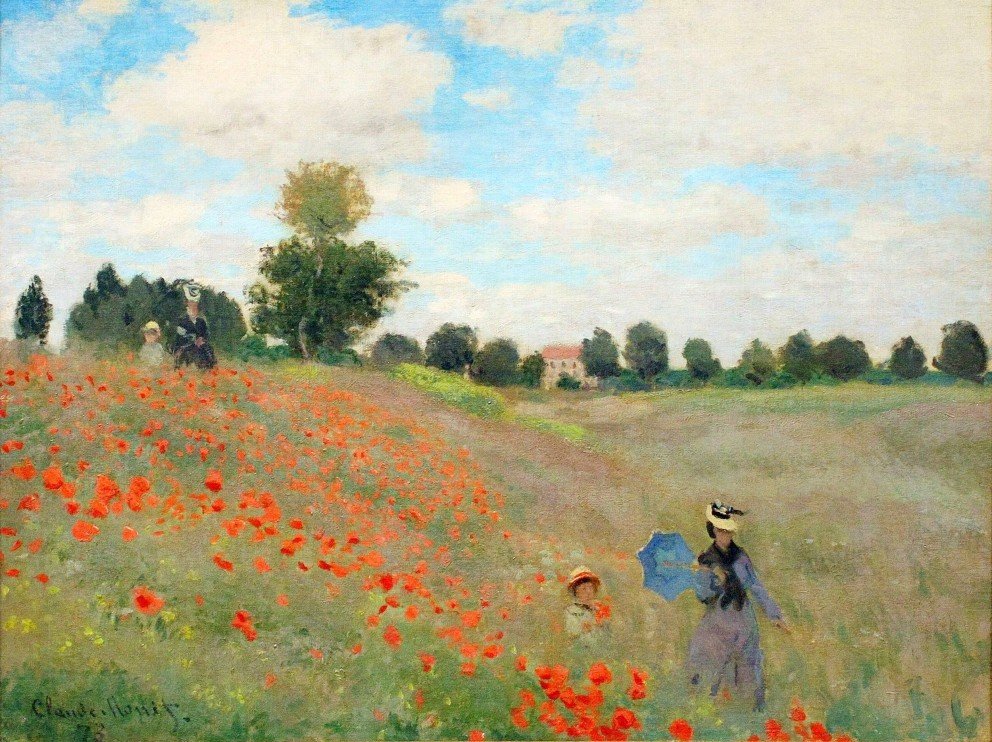 Now one of the world’s most famous paintings, “Les Coquelicots” portrays a stroll through red poppy fields on a warm summer’s day.  The sprinkling of red poppies are represented by simple blobs are red paint.

The “not so fun” significance of Red Poppies 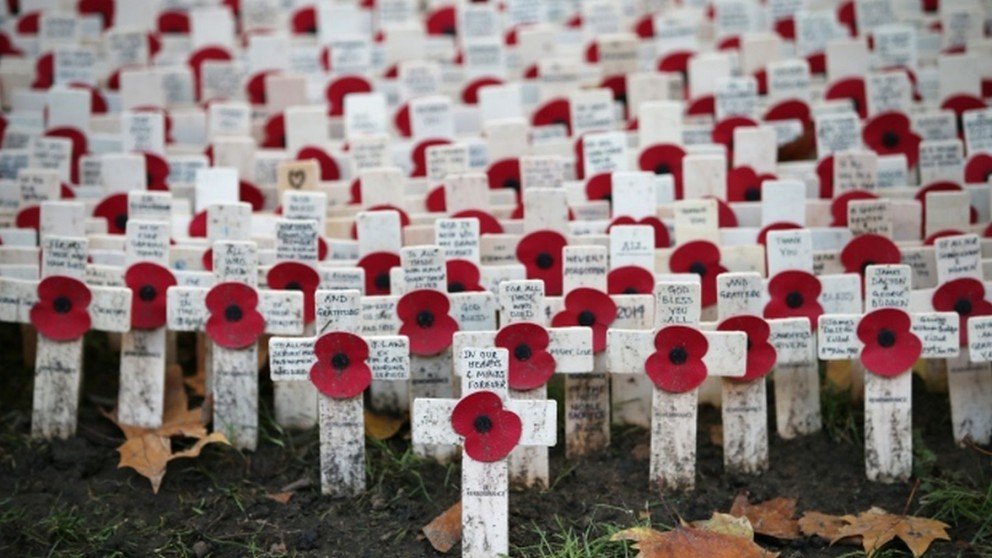 Red Poppies are a lasting symbol of the carnage left after WWI and has come to represent the immeasurable sacrifices made by those who died in WWI and later conflicts. Flanders Fields is the area bordering the Belgian provinces of West and East Flanders and the French department of Nord-Pas-de-Calais.

Written as a memorial while still at the battlefront in Ypres, Belgium after watching his friend Lieutenant Alexis Helmer, a young Canadian artillery officer, die from exploding German artillery shells.

It is said that if you pick Red Poppies, it rains the next day… 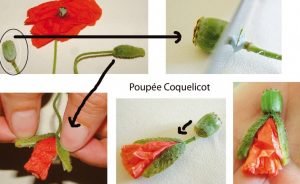 Also known as Madame Coquelicot (or poupée Coquelicot), red poppy flower dolls are the perfect nature craft for the little ones in your troupe…

Version 1 – (uses just a seed pod and a flower bud)

Version 2 – Use the entire flower, and you can even leave it on the stem if you wish!  Prevents useless flower murdering.

FYI – If you are wanting to bring home a bouquet, you must immediately after cutting stem burn the tip with a lighter to prevent the white fluid that fills the stem from exiting.  Without the fluid to keep  the stem full, the flowers quickly dip their heads.

A few days ago, I saw a French chef making “Sirop de Coquelicot” (Red Poppy Syrup).  This is a recipe that all of our French grandmothers used to make…  Since I love unearthing lost bits of culinary history and testing out the recipes, I have it a try!

Red Poppy Syrup can combined with sparkling water as an alternative to soft drinks, added to cocktails adding an interesting and unexpected flavor, or as a topping to ice cream.  The flavor is mildly reminiscent of the wild strawberries found in forests.

Just to clarify, there are poppies that are opiates, and then poppies that are for consumption (like the lemon poppy-seed muffin that you ate this morning)…  The Scarlet corn poppies (popaver rhoeas) that grow naturally around France have a long culinary and medicinal history.

You will need a bag full of red poppy petals for the recipe.  I made the mistake a waiting a little long in the season – the fields get re plowed early June eliminating the most accessible flowers.  Get picking early in the season, and early in the day! 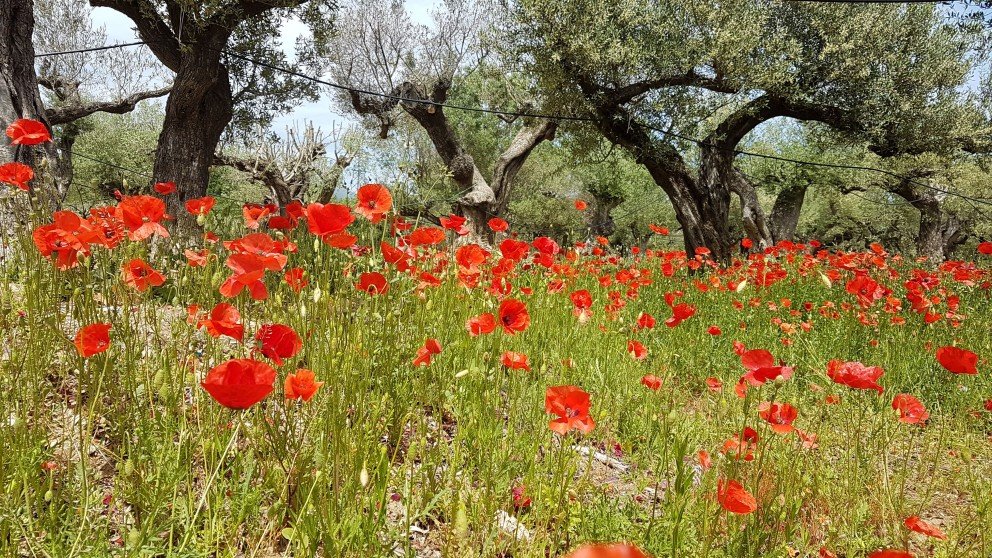 You want bright red flowers, freshly bloomed.  Pinch-off the petals only (figured that out after a bit), leaving the pod in place on the stem leaving seeds for next year’s crop.  You will certainly have some of the black filaments with the petals, and that is just fine and actually beneficial healthwise.

Try not to crush the petals too much or they wilt and start to ferment.  You should be able to gather enough in 30 minutes or so…  After you get home, don’t rinse the petals!  Instead spread out the petals on a white towels so the critters can scamper off (unless you like the extra protein). 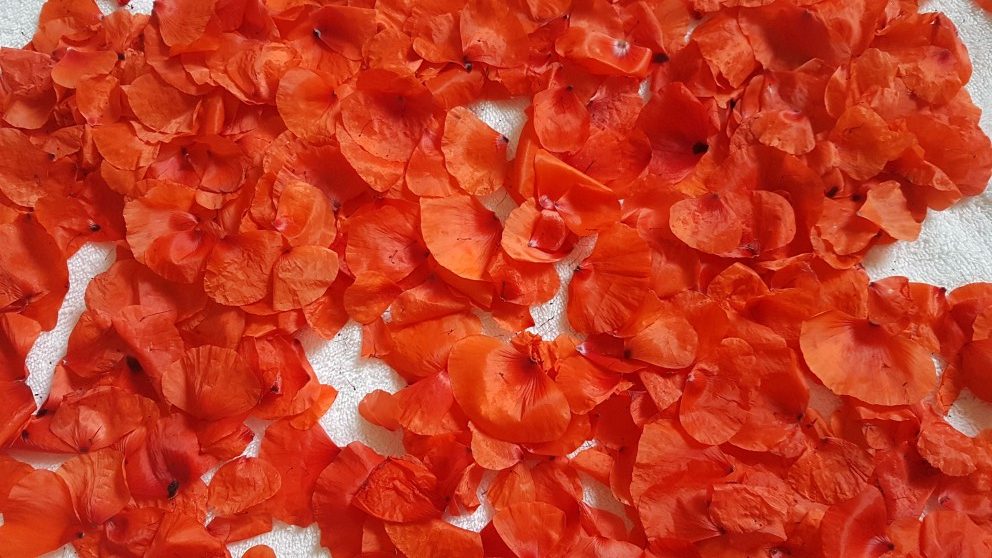 If you were overly enthusiastic and have more petals than you really need, dry some to make Red Poppy Herbal tea.  Toss a few petals into hot water and steep for 8 minutes.  Served with a touch of honey, it is perfect taken right before bedtime for those suffering with insomnia.  Can also be used after a long day of stress to calm and relieve anxiety. 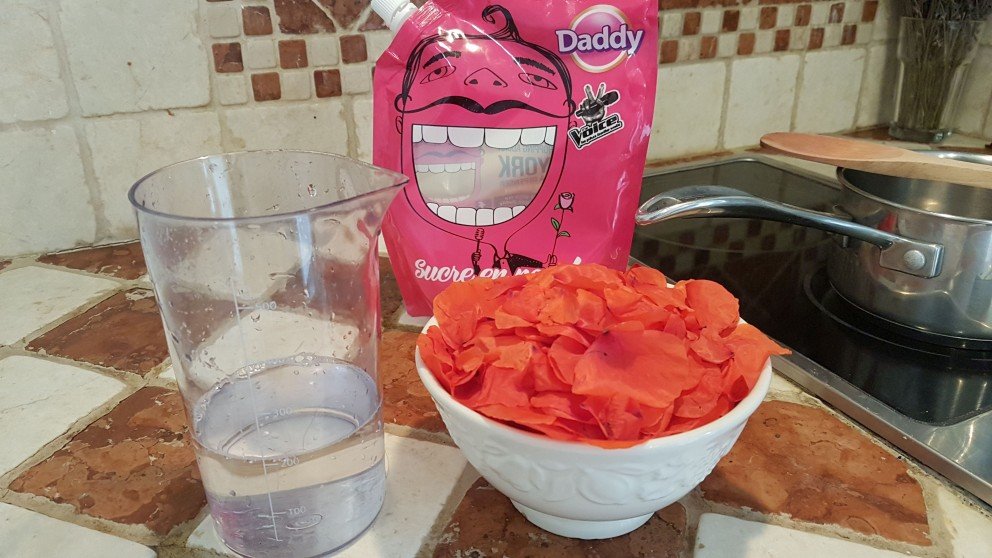 Essentially you are making a flavored simple syrup, the amounts can be adjusted to the quantity of flowers picked (that’s what I did because my pickings were slim).  A lightly packed cup of petals equals the same quantity in water and sugar.

Our French grandmothers also liked to make a Red Poppy Elixir (liqueur), claiming its medicinal properties for coughs.  If you want to try it, instead of boiling water add your flower petals to equal amounts of vodka and let macerate in the dark for 2 weeks.  Shake bottle daily, the petals will turn white drained of all their color.  Strain adding equal amounts of hot simple sugar before bottling.  A large tablespoon should do it for your cough, or serve in small liqueur glasses.   I can already hear grandmother’s fake cough in the background… 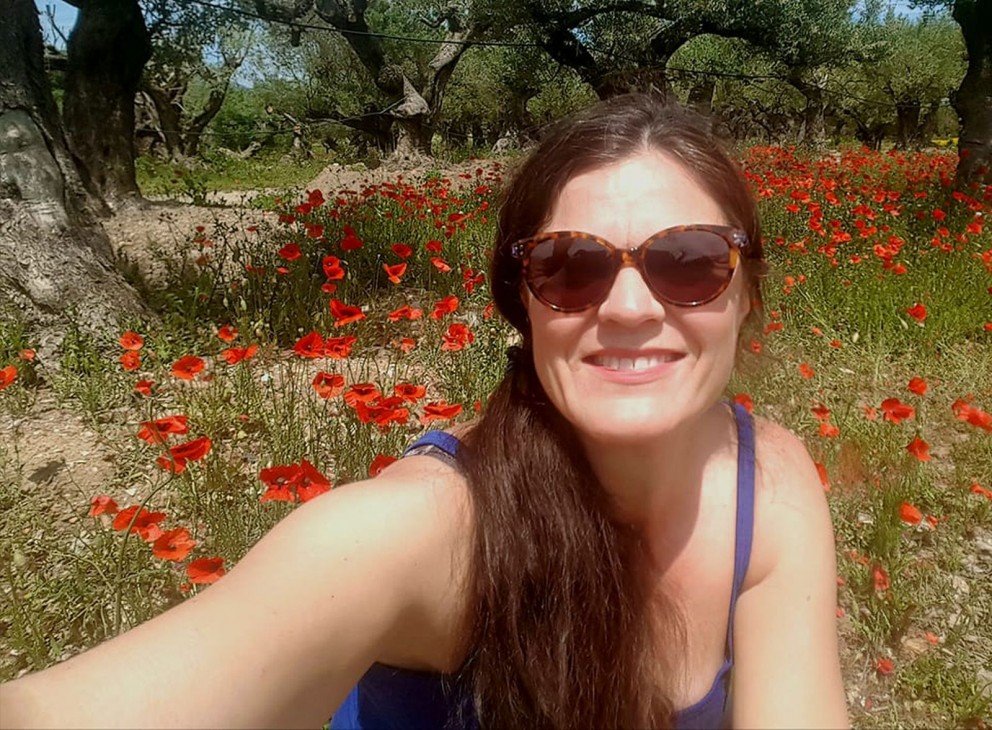 I had a “fun with poppies” session a couple of weeks ago taking some selfies.  Figured that I’d better keep my Facebook Family happy with an update and a few smiling mug shots.  The flowers make such a fun and lovely backdrop, if you visit France during the flowering season, make sure to do the same!

Can you say it?

5 comments for “Fields of Red Poppies…”