Cultivation and use of Saffron spans over 3,500 years and across many cultures…  Saffron is a powerful dye, a culinary herb, and a medicinal plant.

They call me Mellow Yellow…quite rightly.

Click to get in the mood, the mellow yellow saffron mood…

Mellow Yellow (by Donovan 1966) – I’m just mad about saffron, she’s just made about me…

A Few Facts about French Saffron… 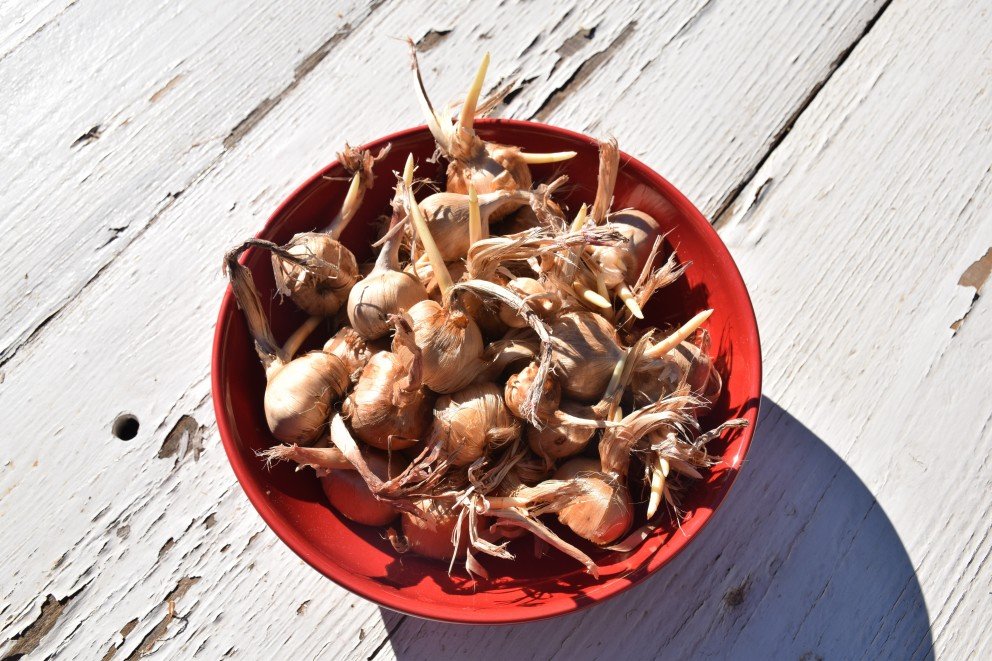 Learn more about the fields o Provence in my previous post “The Saffron Fields of Provence“.

Saffron was first cultivated in Southern France by the Romans.  After the decline of the Roman Empire, its use all but disappeared until the Moors brought it back again during the Black Death Era as a potential cure.  In fact, demand became so strong that Pirates would target Saffron import ships instead of those loaded with gold bars or coins.  The disappearance of a Saffron Ship even sparked a 14 week-long “Saffron War”.

Today, the largest consumer of Saffron are in the harems where men use it to calm their multiple wives, and boost their sex drive so they can keep up with those wives! 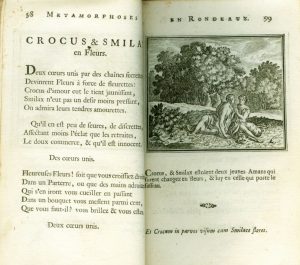 The Legend of Crocus and Smilax

A handsome young man named “Crocus” once fell madly in love with the nymph “Smilax”.  She wasn’t interested and had better things to do, so quickly bored with his flattery and advances.  To take care of the problem, she turned the young man into a flower (better than a toad don’t you think?).  The bright red stigmas glow with his unrequited love.  She, on the other hand, was simultaneously turned into a Greenbriar Sarsparilla vine. That will teach her!

Every last Saturday in the month of October, the village of Cajarc in the Midi-Pyrénées celebrates Saffron! There are stalls selling all types of saffron infused products, a contest for the highest quality local saffron, and a community dinner made of saffron dishes.  If you are in the area, make sure to stop by and join in all the fun!

How to buy Saffron 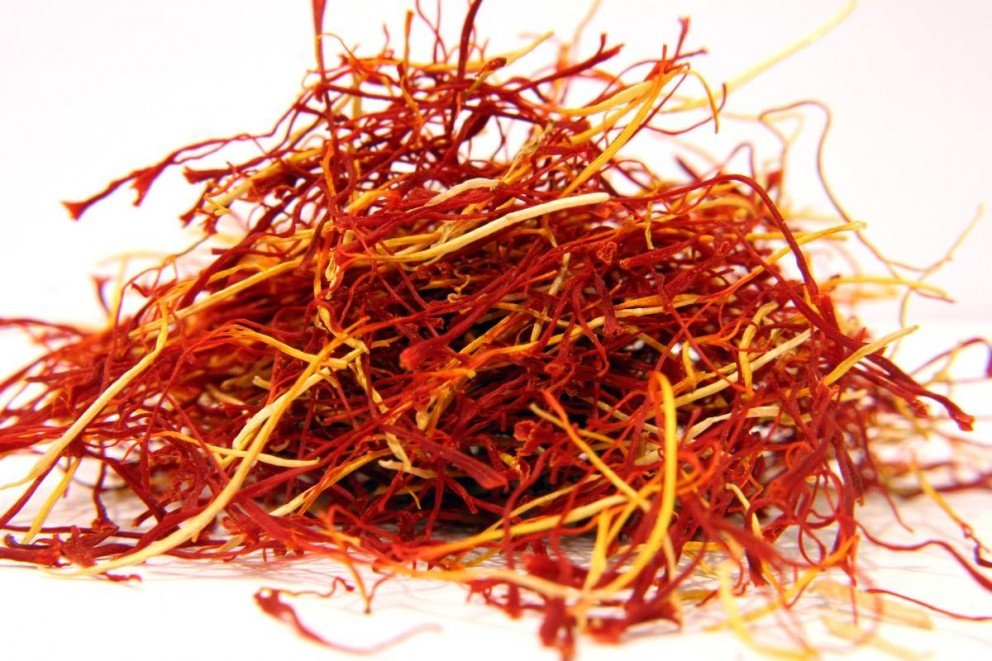 Saffron has been adulterated with other compounds since the day it began to be traded.  Even way back in the middle ages violators were executed under the “Safranschou Law” for dyeing, coating, or otherwise falsifying Saffron (apparently one cheater was even roasted over a fire made with his own flavorless fake saffron).

Want to try Saffron but not sure how?

Keep in mind, Saffron must be rehydrated at least 24 hours (and up to 48 hrs) to fully release its aromas.  It can be rehydrated in anything but an oil or butter. Remember – Saffron is delicate and the aromas are volatile.  Avoid too much heat, and do not boil or fry Saffron.

To use in recipes, count 6 red filaments per person.

Such as the French classic Bouillabaisse.  If your Ratatouille vegetables are not at their peak, add a few strands of Saffron and a sugar cube. Try it in Mussels in a Cream Sauce with Saffron, Couscous, Paella, or added to Rice.  Add it to your favorite vegetarian stew for an interesting twist, Roasted Saffron Cauliflower, or add a pinch to rice pilaf with asparagus.

Delicious in Saffron butter cookies or Orange Saffron cookies, authentic Osmania Iranian Cookies.  Make the Saffron Infused Cake or just try adding a little Saffron to your favorite yellow cake recipe  Why not flavor a Crème Brulée?  If you haven’t yet why not try making GGG’s Orange Provencal Crêpes!  Infused in a simple syrup, you can add it to yogurt or sprinkle over ice cream.

The flavored syrup is excellent in a Kir Royal (Champagne + Syrup), or for a non-alcoholic version try it in sparkling water for an intriguing change to soft drinks.   It’s delicious in Saffron Lemonade with a dash of Blackberry Syrup.  Try it in mixed drinks like the “Bling Out” (equal parts vodka and orange juice, Cointreau, dash Saffron Simple Syrup, dash lemon juice), the Saffron and Cardamom Sparkling Lemonade Cocktail, or the Watermelon Saffron Cooler.  For tea drinkers, it’s an excellent addition with a dash of Cardamom or just on its own in hot water.  Even better, swap the tea for almond milk.

There are extensive ongoing researches about the medicinal properties of Saffron.  Saffron contains vitamins B-1 and B-2, and phytochemicals thought to help support your immune system and protect  body from free radical damage, cancer and infections. 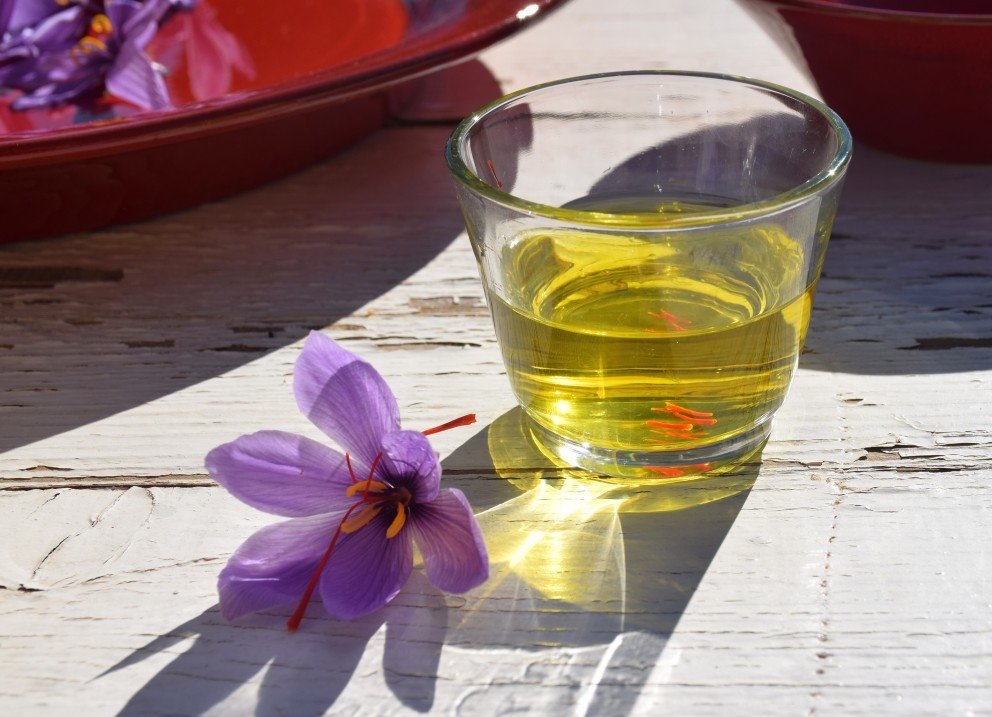 Saffron has found to be as effective an antidepressant as Prozac without all the side effects.  It helps calm and relax, and is helpful for insomnia (try 1 tsp Saffron syrup in warm milk before bed), ADHD, and eases the stresses of Alzheimer’s.  Some research indicates it is helpful in retaining eyesight. Women with premenstrual cramps find it useful to lessen pains.  Eases digestion troubles and helps with colds (add to hot water with a dash of grated fresh ginger).  Blood pressure can be lowered with treatment.  It helps those with Opiate dependency, and is a proven epilepsy anticonvulsants.  The potential for cancer treatment and prevention is currently being studied.   Speak to your health care provider and do your own research before trying any of these treatments.

To use Saffron Medicinally –

Infuse 15 stigmas (30mg) in the liquid vehicle of your choice for 24 hours.  For the proper dosage and you must ingest the stigmas as well as the infusion.  You can also divide the dosage in two (7 stigmas x 2), and take twice a day.  Remember, 1 mg = approximately 2 stigmas.  Typical treatment period is one infusion daily for 4 weeks, max eight weeks.

I purchased my high quality saffron directly from 13’Or Rouge in a convenient 1 gram jar, and they do ship worldwide.  Make a simple syrup using 1 cup sugar (225 gr) + 1 cup water to which you will infuse 1 gram Saffron filaments (450 stigmas) for 48 hours.  Keep refrigerated once infused, the dosage of 1 tablespoon will give you approximately 30mg of Saffron per dose for 30 days.  Makes 2 cups (450gr) syrup.