Did you know?  The last execution by Guillotine in France happened not so long ago… September 10th, 1977!

Over 200 years ago, the French discovered and adopted the Guillotine… The Guillotine was designed by the surgeon Antoine Louis inspired by devices found in Italy.  Dr. Louis perfected his new toy by practicing on the corpses left behind by his botched surgeries and a few sheep (dinner?). It was first presented to the French in 1789 by his friend the Doctor Joseph Guillotin from where it gets its name.

The device was heralded as a more civilized way to end the lives of the convicted.  Apparently, the Guillotine was a privilege usually only reserved for the royalty, as the much more painful hangings were reserved for mere commoners.  Military personnel got the preferential treatments of being shot dead.  How lovely…

The Guillotine is best known for its use in France during the French Revolution during the “Reign of Terror (La Grande Terreur) where 2800 unlucky folks lots their heads.  It was fondly called “Le Rasoir Nationale” (the nations razor), or “La Veuve” (the widower).

The Guillotine in recent history 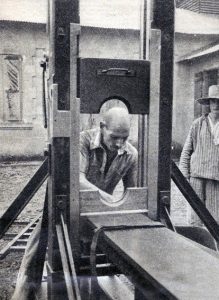 Executions were public and very popular until 1939.  Once its use was closed to public audiences, the device lost in popularity.  During the campaign for the French presidential election, François Mitterrand vowed to abolish the death penalty which he did on October 9th, 1981.  It became Constitutional Law under President Jacques Chirac on the 19th of February 2007. Unfortunately just a little too late for one..

On September 10th, 1977 at 31 years old in the Baumettes Prison of Marseille, Hamida Djandoubi was guillotined for violent crimes.

For those that love the macabre and are visiting Paris, you can visit the vestiges of a Guillotine in the 11th arrondissement where more than 200 unlucky souls lost their heads…  The Guillotine was only brought out as needed, and rested on five large stones.  It only took one hour to set up – so no reprieve for the unfortunate!  The condemned  would be woken at 4:30am, but the event still grew large crowds of gawkers.

Make your way to Rue de la Croix Faubin near the walkway, look for the large stones now rearranged in a cross pattern which were used to stabilize and level the Guillotine and let your imagination take you where it will.  Alternately, you can walk in the footsteps of the French Revolution with “Time Out Paris walk: The path to purgatory“.  And why not finish the day with an evening visit to the Pere Lachaise cemetery???

Just don’t call me if you have nightmares…