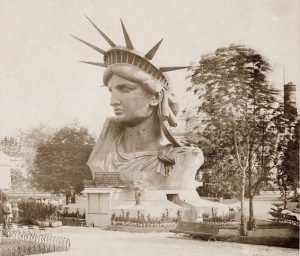 The United States and France have a long history together.  In commemoration of this alliance, the French offered the now famous Statue of Liberty in 1886.  Created by French sculpture Bartholdi and built by the famous Gustave Eiffel, it represents freedom for the people – a belief held strongly by both countries.

Just three years later, Americans residents living in Paris gave the French a 1/8 scale replica of our beloved Statue of Liberty.  Housed on the river Seine, she faces west to gaze across the oceans towards her favorite sister in New York City.

But there are so many more sisters living in Paris…

Have you seen any or all of these?  Why not make a game of it and try to see them all should you have the chance to visit Paris!