Do the French celebrate Halloween ?

Nope ! Not really…If you were looking forward to celebrating Halloween in France with some rocking ghoulish fun, you are likely to be a bit disappointed.  It’s just not like in the United States – no children knocking door to door, or rambunctious roaming adults gleefully revisiting their childhood in full costume !

There are no real Halloween traditions in France.  Although the French typically love costume parties and dressing up (very popular for New Year’s Eve), Halloween is mostly seen as a commercialized American holiday for which the French have little interest. It is scorned, and conflicts with the celebration of “La Toussain” held on the 1st of November (more on that in a minute).

Although the general public in France is quite aware of the holiday, it remains of lukewarm acceptance. In the 90’s there was a real push to popularize the holiday with some success, but the fad has fallen from favor. You will still find a handful of adult party goers, and a small number of kids getting dressed up, but they are the minority and VERY few youngsters actually knock on doors (and then only on family or friend’s doors). By the way, instead of saying “Trick or Treat”, in French you say «Des bonbons où des coups de bâton» (Candy or a beating with a stick). Nice, huh ?

If you still need your Halloween fix in Paris, go to Disneyland Paris where the main street is converted into “Spook Street” for a kid-friendly (but expensive) event. Or, for a MUCH spookier proposition (leave the kids at home for this one), go to the Père Lachaise cemetery where Molière and Frédéric Chopin are buried and where a taxi driver reports transporting his “ghost” client.  Jim Morrison is also often seen roaming around his grave, along with other unknown translucent spirits.  The Père Lachaise Cemetery is always VERY creepy at night and especially on Halloween !!! The Montparnasse and Montmartre Cemetery are almost as scary, or try the Catacombs for more creep where the bones of six million Parisians are resting. 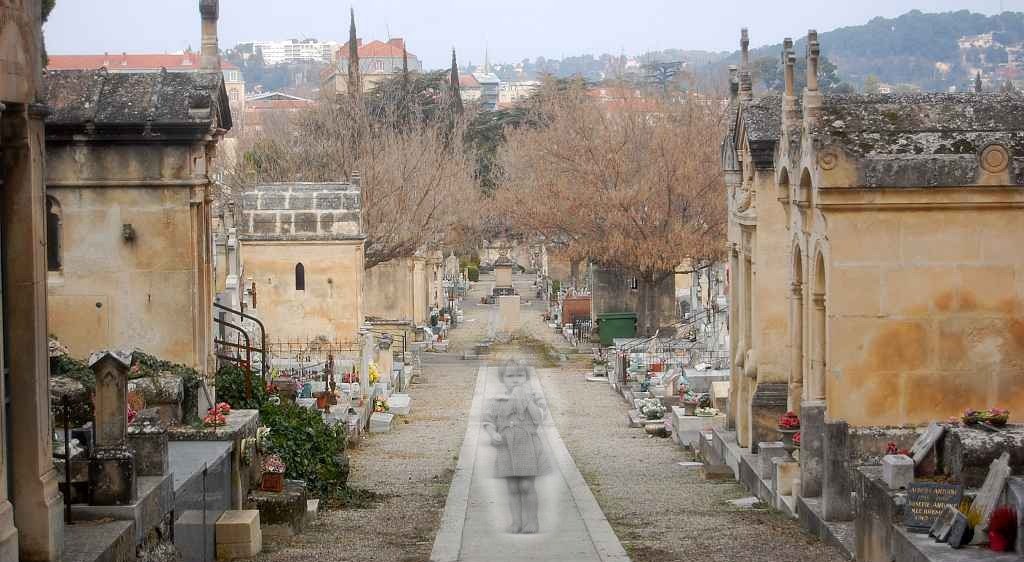 Outside of Paris, ghosts and vampires are said to perpetuate the “Chateau de La Roche Guyon” in the Val d’Oise region. Further away, spirits have been seen at “Mont Saint-Michel” in Normandy. Better yet, in northeastern France, try the Witch Festival (Fête des Sorcières) in the city of Chalindrey. Last, in the city of Limoges and in contrast to the rest of France, thousands of people still flock every year for a candlelit parade to celebrate Halloween. You will find participants dressed as witches, goblins, vampires and anything scary – the French never dress as superheroes or princesses.

Do you want to forget the spook and instead just enjoy a period costume party ? Wait until summer and attend the “Bal Masqué” in Versailles held in June. It’s a fabulous event that I highly recommend. Tickets can be purchased online a few months ahead, and costumes need to be reserved well in advance.

Halloween originated from a Celt pagan celebration called “Samhain”. October 31, known as “Hallow’s Eve”, was the night when the dead both good and evil would rise among the living. To scare off the evil spirits the Celts wore masks; for the good spirits they enticed them with treats and offerings.

Sprouting from “Samhaim” Celtic celebration, the catholic holiday “La Toussain” (All Saint’s Day) arose to commemorate all known and unknown saints. Since the Middle Ages, the “Commémoration des fidèles défunts” (All Soul’s Day) is to be celebrated on November 2nd by visiting the tombs of your loved ones.  Chrysanthemums flowers are left on the graves in remembrance (hence offering these flowers as a hostess gift is never a great idea). In practical reality, since November 1st is a bank holiday and families already have the day off, they pray for and visit their departed loved ones on that day instead.

For those who aren’t practicing Catholics, La Toussaint a great opportunity for a short vacation.  Add in the concept of “le pont” – bridging the one day off with another unofficial day off – and you essentially extend your time off for a nice long weekend. Sadly, this year “La Toussaint” falls on a Saturday so there is no opportunity to “faire le pont”. In other years where the timing is  better, make your train and hotel reservations well in advance.  If you are one of the few unlucky working folks over La Toussaint, don’t expect to get much done as everyone will be out of town.

2 comments for “Halloween Traditions in France and “La Toussaint””