History of Lyon’s Festival of Lights

A festival spawned from an age-old custom…

The Festival of Lights extends the traditional festival of December 8th when the residents of Lyon celebrate the Virgin Mary, whose statue stands on Fourvière hill overlooking the city. 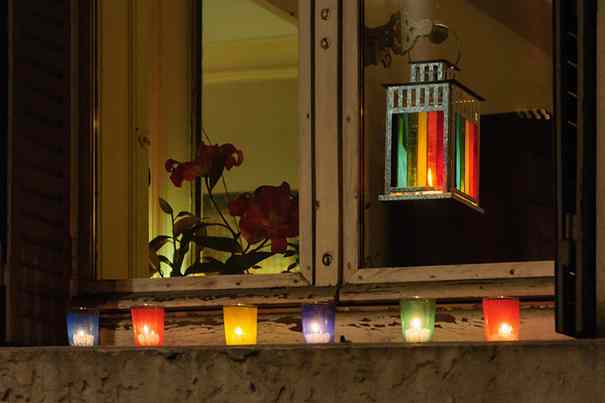 History of the festival of lights Lyon

The history of the Festival of Lights Lyon continues every December 8th, as locals place colored or clear glass votive candles on the windowsills outside of their home creating thousands of twinkling lights to cheer up the night. The votives, called “Lumignon” in French, are sold in shops beginning in November.

This charming tradition evolved from a celebration dating back to September 8th, 1643 giving thanks to the Virgin Mary for sparing the city of Lyon from the plague which had struck in the south. A solemn procession of worshipers wound through the streets carrying candles up the hill to the Chapelle de Fourvière (built in 1168 and later replaced in by the Basilica de Notre Dame De Fourvière in 1872 which still stands today).

From this tradition in 1852 sprang the decision to celebrate on that same date the inauguration of a new statue of the Virgin Marie that was to be placed on the Chapelle de Fourvière. Due to flooding in the area, the event was pushed back instead to December 8th, a date chosen as already set aside in celebration of the Virgin Marie since the IX century.

This type of religious procession, somewhat similar to a pilgrimage, is not unusual and has been repeated over the centuries for a variety reasons.  I remember from my childhood living along the coast in Normandy similar processions that honored  those lost at sea – “La Fête des Mers” – still celebrated to this very day every August.  Participants holding lights serpent up the hill to Notre Dame de Salut in Fécamp in solemn remembrance.  If I remember correctly, the somewhat updated version of the procession involved flashlights and scooters instead of candles and a strenuous walk uphill.

More recently, in 1989 the city of Lyon itself began organizing the festival evolving it into the major event it is today. Currently, the light celebration spans four days but has otherwise lost much of its religious significance. However, in solidarity to the inhabitants of Lyon and in respect for the tradition of the “Lumignons”, every year the city chooses a charity for which to benefit along with a light display honoring the tradition.

Some confusion as to the significance of the “Fête des Lumières” occurs by non locals because of its proximity to Christmas – but there is no relation whatsoever.

So this December 8th, why not light a few candles and place them on your own windowsill to cheer the night and continue this lovely tradition in your own home ?