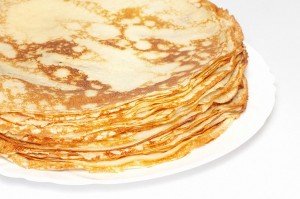 OMG I might actually have to start some kind of sort of exercise program to work off all the extra pounds from the “research” I’ve been doing lately, and this Crêpe Day thing isn’t helping.

“La Chandeleur” is a religious holiday celebrated exactly 40 days after Christmas, on the 2nd of February of every year. It celebrates the presentation of the child Jesus at the Temple in Jerusalem.

According to Jewish law of the time, a mother who gave birth to a son was considered impure for seven days, to which 33 days were added for her blood to purify. Thus, Marie could not present the child before this period of time had lapsed. Interestingly, should you have a girl, you’d have to wait even longer – double that time. Not sure what the thinking is on that one… 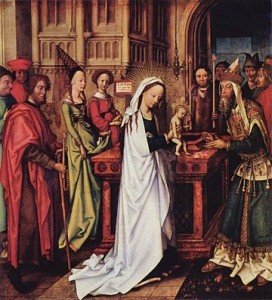 La Chandeleur is yet another one of those many Pagan celebrations gone Christian, this one dating back at least as far as 472. The pope is rumored to have given out Crêpes to the Pilgrims arriving in Rome for La Chandeleur back in the day… These days you can pretty much forget about doing any pilgrimages and just eat a lot of crêpes.

Originally called “La Festa Candelarum” (meaning Light) by the Romans, the festival celebrated light and the end of Winter. Other potential influencers include the Roman festival called “Les Lupercales” (February 15th) celebrating fertility and purification, the “Amburbiales” involving the purification of Roman villages, as well as the Celt festival (February 1st ) again with the same purification theme plus processions through the agricultural fields guided by lit torches. “February” means “To purify”. 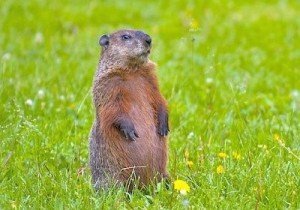 The weirdest reference I found which apparently persisted from the 12th through the 18th century in Europe involves the celebration of the hibernating bear leaving his den (think Ground Hog Day), and was usually celebrated January 24th. Participants would dress up like bears and run around creating havoc everywhere and then run off with the daughters of the village. La “Chandeleur” was even called “Chandelours” (Ours = Bear) in certain regions of France including the mountains and forest of the Alpes, Pyrenees, and l’Ardenne.

La Chandeleur still marks the end of Winter and a return to the fields for many peasants around the country. To this day, many traditions and superstitions persist. Candles are blessed by the local priest and lit to protect the upcoming harvest. The round shape of the crepe is said to symbolize the return of the sun.

Local Traditions – Why not try a few yourself ?

For whatever reason, I don’t really recall celebrating Chandeleur in our family. We definitely ate crêpes, especially with my own kids, but not so much for La Chandeleur. I’ll have to rectify that by eating a few extra crêpes to make up for the lost time.

I hereby officially invite you to join me in my quest to put on a few more pounds; I’ve posted my favorite crêpe recipe for you to try out.