There certainly isn’t a shortage of excuses to eat good food in France, and the tradition of the Galette des Rois is just another example that I heartedly welcome.

A Galette des Rois is a dessert eaten in early January (the second Sunday after Christmas). The celebration of Epiphany (from the greek word “apparition”) is the excuse given for this tasty treat. Epiphany is a Christian holiday celebrating the arrival of the three kings to Bethlehem. France is a predominantly Roman Catholic country, and the vast majority of the French population (85%) still enjoys this tradition.

What is « La Galette des Rois »

In its most basic form, a Galette is just is a round disk of pure butter puff pastry – simple, but delicious. This style of Galette, sometimes called “galette sèche”, is our family’s galette of choice. We like it slathered with jam and butter (there can never be too much butter in my opinion) straight out of the oven. This original style of galette is no longer very common, and has been largely replaced by the “Galette Parisienne” which has an added layer of “frangipane” (an almond paste mixture).

You can thank Marie de Médicis (second wife to King Henri IV) for this version of the Galette. The rumors are that she asked her chef to add frangipane to the galette to brighten up the flavors more to her liking. Ignore any references to Anne of Austria as the originator; the consensus is clear that frangipane is of Italian descent. Regardless, my family finds the addition of frangipane quite horrifying and a violation of the tradition, but I’ve been known to enjoy a slice or two in secret (please don’t tell !). 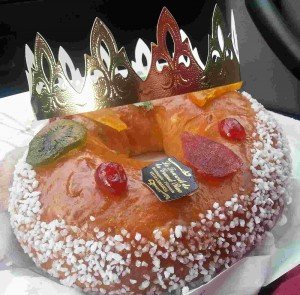 If you know much anything about France, you know each region has its own personality, peculiarities, and regional variances. This also stands true for the Galette des Rois. In the south of France, the “Gateau des Rois” (Kings Cake) is much more prominent. The demarcation is clear, draw a line diagonally from Nantes to Nice and you have the “Gateau des Rois” region. It is a brioche like bread flavored with orange flower water and sprinkled with candied fruit, then shaped into a ring. I’m not so much a fan, but I’m not ready to get into any hot debates with anyone down here in the South (temperaments in the south run hot like all Latins). Things are already shifting somewhat as modern transportation brings northerners and their traditions down south.

Whatever your preference, you can find Galettes at your local French Boulangerie throughout the month of January extending the pleasure as long as possible. You might have to special order the “Galette Sèche” since it isn’t very common anymore, or the “Gateau des Rois” if you are up North.

A word of warning : the sad truth is that about 80% of the Galette’s are factory made (as are many baguettes). Find yourself a REAL French bakery that does things the old-fashioned way, whether in France or in the States.

Inside each and every Galette (or Gateau) des Rois, is a “fève”. Originally a bean representing fertility, in its best form, a fève is a small porcelain figurine representing royalty, good luck, or a nativity figure. I get seriously annoyed when I find a plastic Garfield in my Galette, it’s just wrong and it’s exactly what I got this year. There are actually fève collectors, called “Fabophiles”, with a club and bi-annual magazine. The first porcelain fèves date from the 1870’s, and the Musée de Blain has a collection of 20,000 féves for those interested in learning more.  I have a small collection myself, inherited from my parents and added onto throughout the years. Note the one in the photo of a baby…it is shaped like a bean. 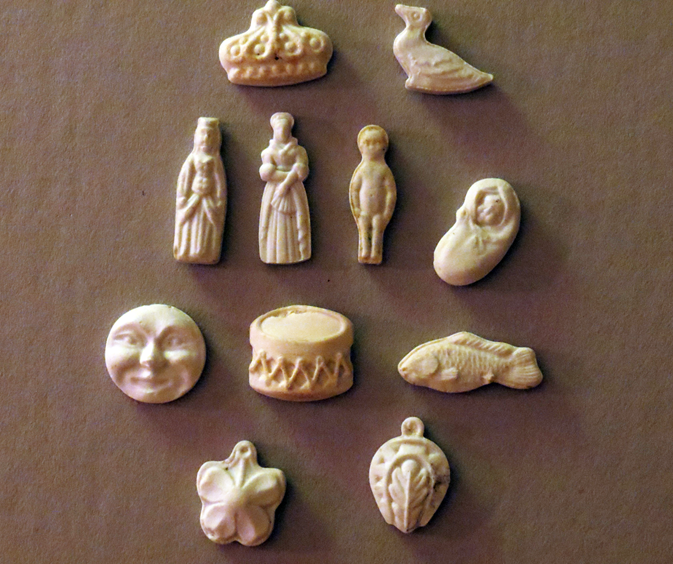 But wait, there’s still more !!! You also get a gold paper crown (for the “King”), and when I was young a second silver crown (for the “Queen”). Nowadays if you want the second crown you have to ask for it, and it will almost always just be another gold one. Huh you ask ? What you talking about Kings and Queens ???

How to eat it 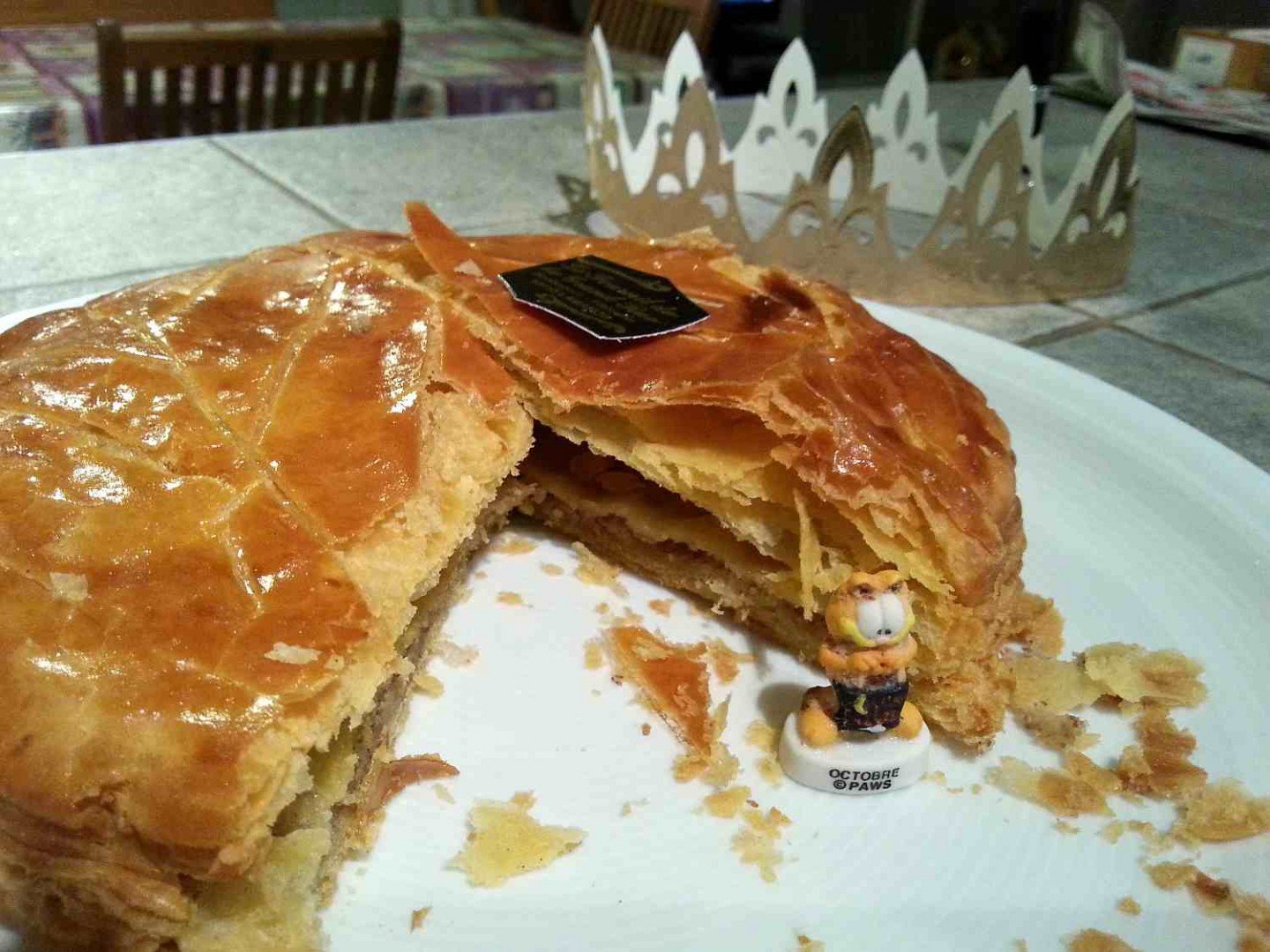 Tradition must be respected, so yes you must follow the proper way to eat a Galette (and there is even a traditional beverage to go with it : a demi-sec hard cider).

Now the real fun starts. Start eating…and try not to break a tooth! The person who has the fève in their slice of Galette becomes the King or Queen of the day. You also get to pick your partner in crime, the Queen or King of your choice. You HAVE to wear the crown or it’s cheating. Now in theory, you can ask for anything you want. In practice, that never worked for me as a child. 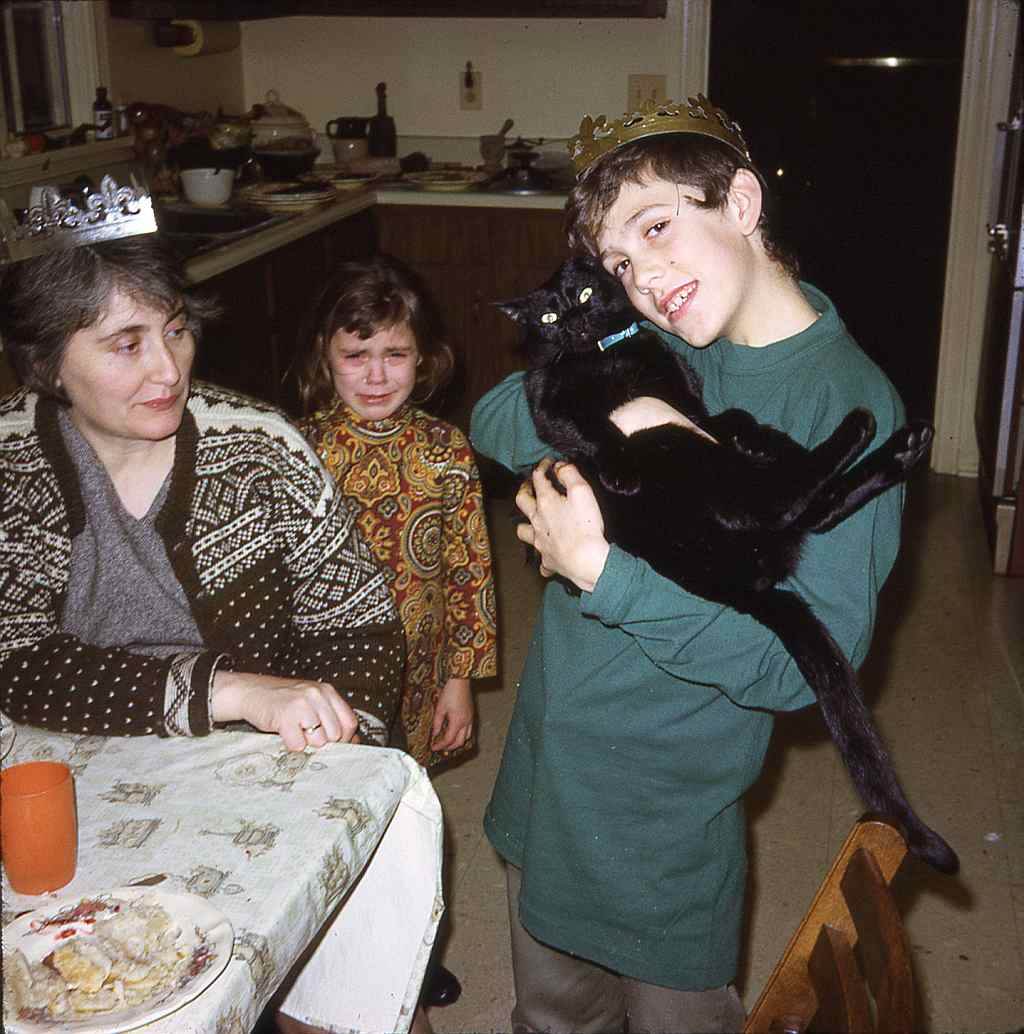 A survey showed that 68% of parents cheat to make their youngest children get the fève, mine obviously never did.

In addition, every time you or your cohort take a sip of your cider, the others (your subjects), must pronounce in unison “Le roi bois” or “La reine bois” – the king or queen drinks. Peculiar isn’t it? I just thought it was another strange French tradition, but really it was just my parents being weird. No one else seems to do this but us. Makes for a lively evening though, particularly if you finish off a bottle or two of hard cider…

In their defense, I actually did find an archaic reference written by Françoise de Motteville stating that in 1649 the queen visited their family and shared with them a galette, she getting the slice with the fève. The queen ordered that a bottle of hippocras (fortified mulled wine) be brought out in celebration. In their alcoholic enthusiasm, the family cried out “La Reine Bois”! I’m still not sure how that translates into our family custom, so if anyone can clarify I would be quite relieved to know it’s not just my crazy family.