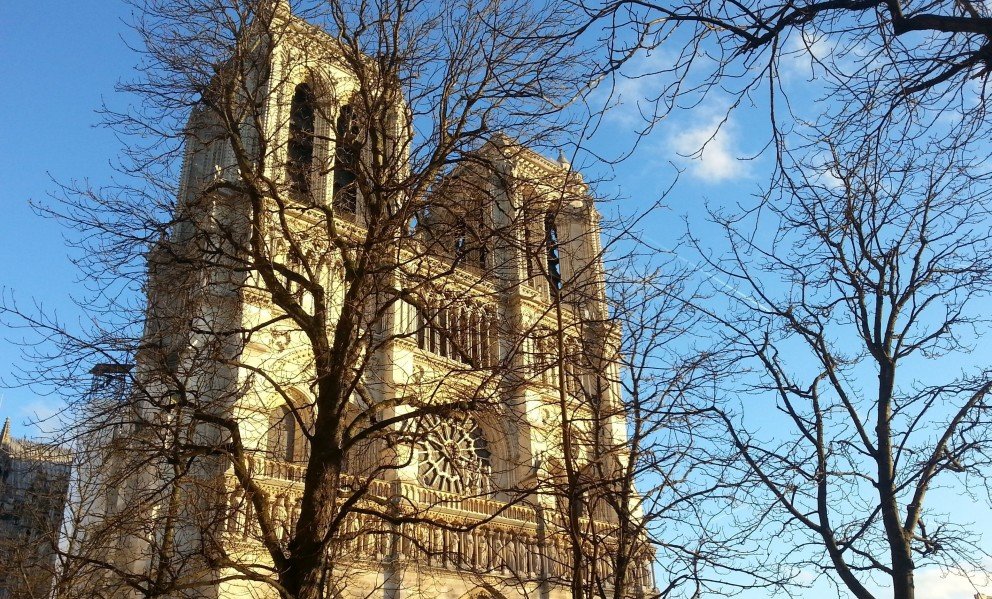 “Ça m’a fait quelque chose au coeur – comme si une partie de moi mourrais...” (It made my heart ache – as if a part of me had died.)

– said my French mother when she heard the news.

Where once a graceful spire reached for the heavens, now only a gaping hole remains. One of France’s most visited landmarks, second only to the Eiffel Tower, Notre Dame de Paris’ vast timber framed roof smoldered into a pile of ash and rubble leaving three large gaping holes in the vaulted ceilings …

The damage could have been far worse, powerful stone vaults and elegantly pointed arches hallmarks of the gothic style are engineered to resist fire damage.

The extensive damage is just another chapter in the cathedral’s history.

What many may not realize is that Notre Dame de Paris has been damaged many times over in its 865 years of existence, including damage during the French Revolution, WWI & II, and more recently the devastating 1999 storm that also crippled the forest at Versailles.

“This fire is totally shocking and the damage it caused is absolutely heart-breaking, but this is not the end. Notre-Dame still stands and, as long as it does, this cathedral will continue to embody something truly beautiful about our collective humanity. Notre-Dame is a place where the human spirit takes form in stone, light, and colour. Although some of its parts are now in ashes, it will endure.” – Emily Guerry / History Extra

In fact, Notre Dame de Paris was already in dire need of repairs. The structure has been slowly crumbling over the years and centuries. The last major renovation had been done back in the mid 1800’s. I had often wondered about the collection of artifacts and stone pieces behind the cathedral, only to realize later that they were in fact pieces that had either fallen off or been removed in fear they would soon fall. A ten year renovation plan had already begun in 2017 with the 19th century gothic spire at a cost of over $6.8 million. It is the scaffolding for this same renovation that caught fire.

Workers have already begun removing the damaged scaffolding from the now missing roof, but it is a colossal task and only the first step in the rebuilding process. They are also frantically erecting a tent over the cathedral to protect it from the rains that have been announced. A more long term solution is being devised in the form of a super sized umbrella that will protect the cathedral while allowing the renovations to continue.

In the spirit of renewal and continuation of the cathedral as a living monument, there will be an international competition for the architecture of the cathedral’s rebuilt spire (known as “la flèche”. Debates already arise as to whether to keep the historic style or bring a touch of modernity to the spire, echoing the struggles of the 18th century restorations. Tastes and esthetics will always continue to change with the generations…

CBS video footage of the fire

Drone footage of the damage

What caused the fire at Notre Dame?

The timber roof structure was known to be the most fragile part of the cathedral. Each beam holding up the roof was made from an entire oak tree, hence the nickname for the structure of “La Foret“. (Photo credits: notredamedeparis.fr)

The Crown of Thorns is saved!

Learn more about why this relic is so important to so many:

The bells have not been silenced. These same bells that once rang for the French Revolution and for the liberation of Paris, WILL ring again.