Greeters – Your Welcome Mat to Paris

What a fabulous way to get an insider’s look into Paris (or any myriad of other cities worldwide for that matter)…  A Paris Greeter will invite you to discover the true Paris, the way Parisians live and love it!

So what exactly is a Paris Greeter?

A Greeter is a friendly volunteer Parisian that takes groups of up to six people on a leisurely city walking tour in English (or nine other languages of your choosing including French) to a chosen neighborhood to discover hidden places, historical tidbits, cultural curiosities, and insider places.  It is very much like discovering the city with a long-lost friend.

“Our volunteers … are enthusiastic and friendly; they know Paris well and give their time and knowledge freely so that you discover their city as a friend would do”.

Come as a visitor, leave as a friend…

Why were the Paris Greeters created?

Completely nonprofit, the Paris Greeters chapter was launched in 2007, following in the footsteps of the original and very successful New York City Greeters that launched in 1992 to combat the cities poor image of being dangerous, overwhelming, and expensive.

Who are the Paris Greeters?

Currently in Paris there are about 350 Greeters  (1500 Greeters in all of France), of which 50 are most active.  In addition to the Paris Greeter Website, there is also a France Greeter Website, as well as a Global World Greeter website – and all of them are loosely associated.  You can even start your own chapter if you like, you just need to apply and have five like-minded friends to get started.

Greeter Guides are not trained and certified tour guides, but passionate volunteers living in Paris and eager to share with total strangers their personal perspective of this magnificent city.

What do they get out of it?  Simply the experience of sharing and meeting a wide variety of people from far-flung places.  There is no monetary reward, and tipping is strongly discouraged.  Since the Greeters live and breathe the city every day of their lives, there is no better way to experience it than with a Greeter.  It is very much like strolling the city with a friend…

What type of tours do the Paris Greeters offer? 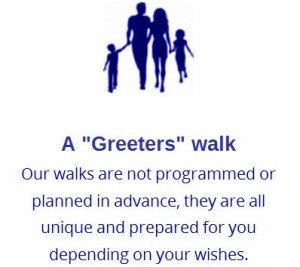 There is no catalogue of walks or specific neighborhoods to visit; it is simply up to you and your Greeter to decide what is best.  As such, the actual contents of the walks vary widely depending on your personal interest and the Greeters knowledge.  Fill out the online contact form and be specific in what you wish to visit to they can match you up with the best Greeter in their network.  Only the fields noted with an asterisk are actually required information, but the more data you provide, the better your chances of getting a good match for your walking tour.

How do you sign up for a Paris Greeters?

I decided to try out the services so I could determine whether or not to recommend the Greeters Network.  It was pretty simple to get started, just a short online inquiry returned an answer back within a few short days.  I actually didn’t realize I had received an answer back until I checked my spam folder.  If you don’t hear from them within a few days make sure to check yours!  Thankfully it was not too late… 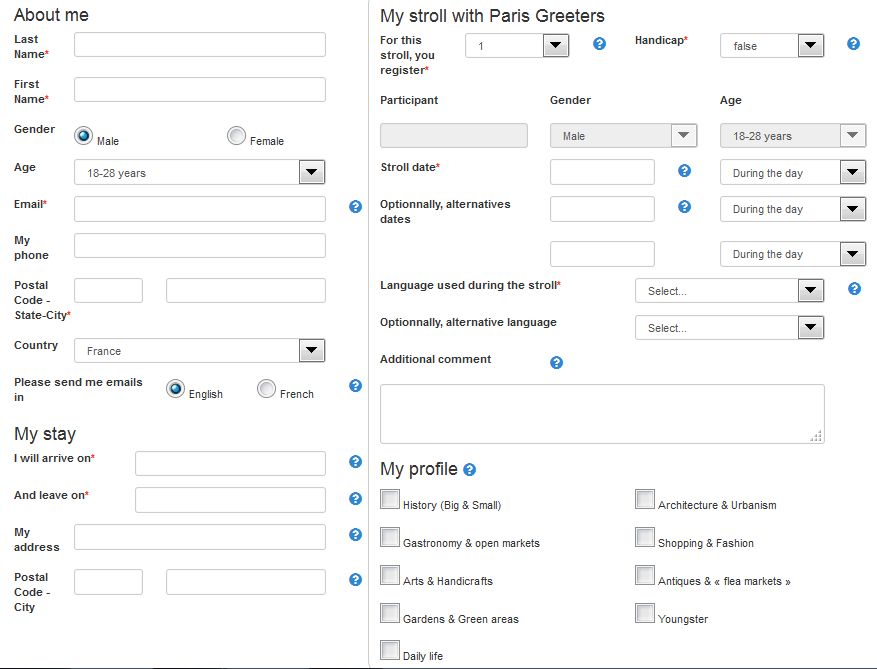 Communicating with your Greeter

After accepting to move forward with the guide that I was offered, I made sure to get permission to write a blog article about the experience. After that, there were a few more emails to determine the details, and we exchanged cell phone numbers just in case an issue came up (but that’s not at all required).

Paris is so much more than just its monuments, and your Greeter is the perfect ambassador to guide you into the secrets of Paris.  Allow yourself to be surprise!  Originally I was offered to stroll around the Marais district as that is often a tourist favorite, but my Greeter soon realized that I already knew Paris pretty well and offered to instead take me into her own neighborhood.

Do I recommend Paris Greeters?

Yes, wholeheartedly.  My Greeter, Andrée, was simply delightful and I cannot recommend enough the amazing experience that I was offered – and all for free!  Andrée was very knowledgeable, warm, charming, and had a sincere desire to share her world with me – and her English was flawless.  An insider look is always what I am after in my travels, and I can safely say that I was not disappointed.

At the end of the day, I truly felt like I had a new friend in Paris…

Not convinced?  Check out the site for yourself…

Forgot to plan ahead?  Get in on the fun by trying Discover Walks in Paris only (free but tips encouraged unlike the Greeters Network)  held every day rain or shine.

Curious to learn more details of my walking tour?  Stay tuned and all will be revealed… and I promise you will not be disappointed!

3 comments for “Greeters – Your Welcome Mat to Paris”