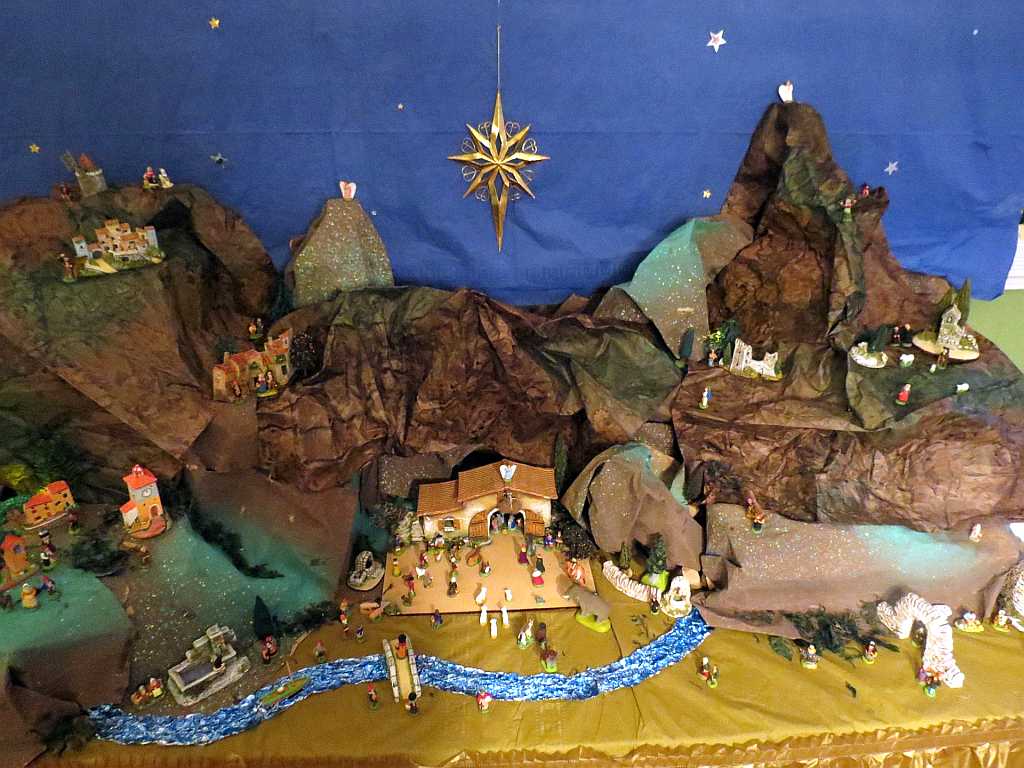 Every year, we kick off the Christmas season in early December by setting up our family’s Provençal crèche.

So what is a Provençal crèche you ask ? It is a depiction of the nativity scene (or crib as the English like to call it) using clay figurines and set into a 19th century Provence village. It’s similar to other crèches that you may find in homes across France, except it goes much farther by encompassing an entire village scene.  My parents starting collecting the miniature Santon’s (meaning “little saints”) when they first married back in the 1950’s. It has grown over the years to quite a large collection, with new pieces being added every once in a while as the mood strikes. A crèche is never meant to be completed, but to grow and evolve with the passing of the generations. 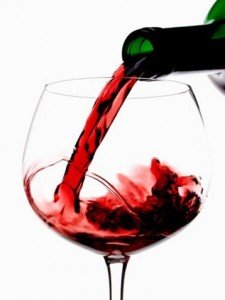 We gather together over food and wine, selecting a few close friends to initiate into the delightful world of the Provençal Crèche. Many are unfamiliar with the tradition, so it’s always a fun way to share our traditions and French heritage. Plus, there’s always a good bottle of wine or two to get us motivated and scrumptious food to helps us keep up our stamina – it’s hard work after all !

Tools of the trade –

…and don’t forget that obligatory glass of red wine or two (we are French after all, and it keeps the bickering down to a low murmur)

Only now can the Santons figurines be added, and this is when the real magic starts to happen…  It takes quite a bit of time to add all the Santons and a few heated debates about the perfect placement of such and such character usually transpire. Then there is also the inevitable toppling of a few figurines from a clumsy move or two (the red wine may be to blame).

In our family, certain figures MUST AT ALL COST be placed according to our personal family traditions. If the duck is not in the boat, civil war is sure to ensue. We all love each other dearly, but bickering is definitely part of the process as you can imagine when you put a whole family of strong-minded folks in one room all together.

In theory (and appealing to my OCD tendencies), the figurines should move about the scene as the Christmas season progresses to illustrate the nativity story.  Marie and Joseph arrive at the stable early December, baby Jesus is added to the scene on December 25th, and the three kings and camels inch their way towards the stable finally arriving on January 6th. In our home they all go out at once, but I’m petitioning for an update to this policy.

Sadly, because of the distance between our homes I can’t always attend our “Crèche” day, but I usually manage to sneak in my personal stamp by moving a few characters around when no one’s looking. But don’t tell anyone… 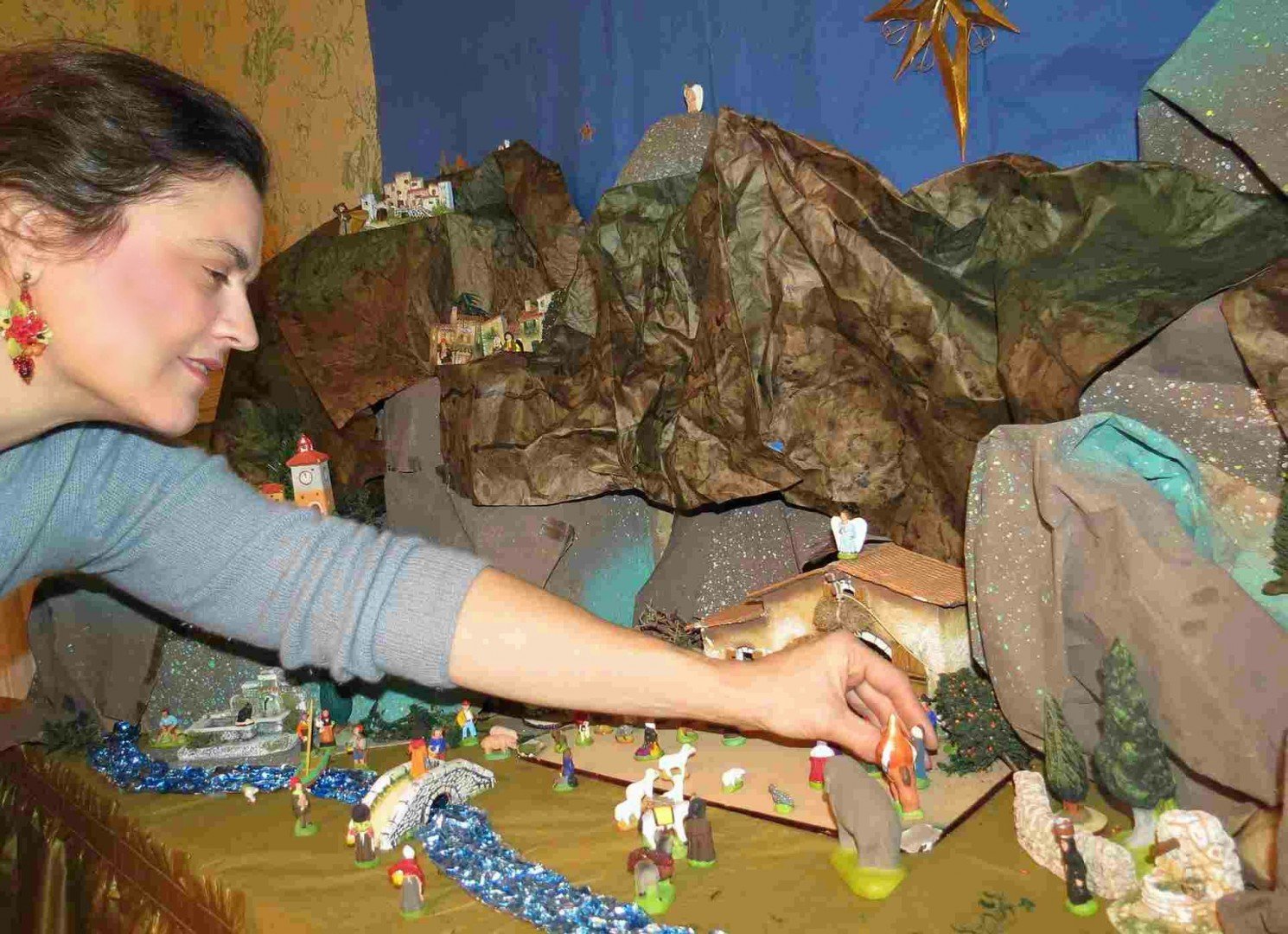 The official end of the Christmas Season is February 2nd with the Chandeleur Fête (or crêpe day as my kids call it). Originally a pagan event celebrating purity and fertility, it was replaced in the 5th century by lighting candles in the home to symbolize the salvation and protection brought to the faithful. The round shaped crepes that are traditionally eaten at this time represent the sun, and are a symbol of prosperity. That all seems a bit of a stretch…to me it’s just another good reason to eat great food.

The origin of the representation of the nativity scene dates back to medieval ages. Saint Francois d’Assise of Italy was the first using live actors and animals in his church in 1223. These live crèches were eventually replaced somewhere around the 16th century with full-sized figurines made of wood, wax, or papier-mâché.

The origin of the “Provençale” crèche dates back to the French Revolution resulting in the closure of churches and the banning of midnight mass in 1793. The faithful, needing a way to worship and to practice their religious beliefs, fashioned nativity scenes in hiding. Early on, they were made with anything they had on hand – often bread dough. It was in Provence that the little figurines that we now call Santons were first made. Since the faithful had to be extremely careful, these little figurines were the perfect answer as they were small and quick to hide. This of course was strictly outlawed, and anyone being caught would have their head chopped off !

The very first commercialized Santon were made by Jean-Louis Lagnel (1764-1822) in Marseille.  Before the French Revolution, he was making full size figurines for the churches, so it was an easy transition to the clay figurines. At first, he started making them for his own use but soon after it was legalized he started manufacturing plaster molds which enabled him to mass produce the little figurines made at that time of unfired clay painted with powder pigments and extremely fragile.  It was his idea to add figurines representing the different rural trades to be found around Provence at his time.

Traditional Santons are frozen in time, always dressed from this period. Thérèse Neveu of Aubagne, considered the commercial father of the industry, was the first to start firing the clay figurines to make them more durable. He even won the praise from writer and poet Frédéric Mistral, champion of the Provençal language.

It is interesting to note that the clay industry in Provence dates back to Roman times. In its heyday, Aubagne’s clay industry provided employment for a large part of its population. The industry persisted into the 19th century, with chimney stacks littered across the local skyline. 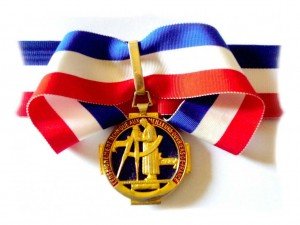 The Santonnier – an artisinal craft

Today, there are many Santonniers in Provence, and most are family affairs. The skills are passed down from generation to generation. It is a long and precise process to create a Santon, and all of it done by hand. In fact, the majority of the manufacturing cost goes into labor. New models are imagined and added to the collections every year.

The best Santonniers have won the prestigious “Meilleurs Ouvriers” award which they proudly display in their workshops and stands. My two favorites Santonniers for their fine workmanship are Carbonel and Escoffier. Escoffier has not only a shop, but also his workshop and a small museum side by side in Marseille. Escoffier, who has a permanent shop in Marseill”s Old Port, has his workshop in nearby Aubagne. Both can be found at the Marseille Foire des Santons.

My amazingly talented brother decided to try his hand as a pseudo “Santonniers”….  Below is his incredible work – I think he can easily compete with the best of them !  Orders anyone ???

If you are interested in starting your own Provençal Crèche, stay tuned…  I’ll be sharing resources and places to visit in my next blog should you ever find yourself in Provence over the holidays.

← What NOT to Wear Paris – Checklist
The Santons of Provence →

4 comments for “The Provençal Crèche – A Christmas Nativity Scene”