by Girl Gone Gallic on February 10, 2017 in Destinations, Events • 0 Comments

Get ready for a real treat! This scenic route offers a sublime landscape with quaint villages, golden blooms, climbing mountaintops, green valleys, and a beautiful coastline.  All set to bright skies (hopefully), the deep blue sea, and a backdrop of snow topped mountains.  Don’t forget that with the Massif du Tanneron in full bloom from January through March, the best way to enjoy this magnificent scenery is by foot.  Get out of the car and get exploring!  130km (80 miles) of wonderfulness…

Avoid rushing from village to village and missing out on what makes this route so special.  This is completely authentic and off the beaten track, with nary a tourist in sight!  But you really need to take the time to slow down or you’ll miss the whole point… Personally, I’ve got my eye on the « Bal du Mimosa » in Pégomas for an evening of dancing with the locals.

I’ve broken the route out to 3 separate colored sections, each one best done in a full day of exploring.  Green and Orange are along the coast, Purple is inland up into the mountains.  If your really want to do the whole route, allow three days so that you have plenty of time to stop and look around. 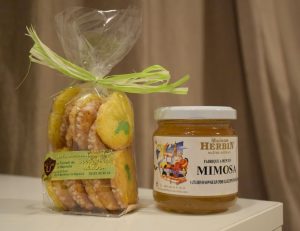 Don’t be disappointed if some villages have just a sprinkling a Mimosa trees here and there, especially if you arrive early in the Mimosa season.  The goal of GGG’s Mimosa Itinerary route is to explore the villages, the Mimosa is just a wonderful bonus.  Take your time to enjoy this beautiful region! 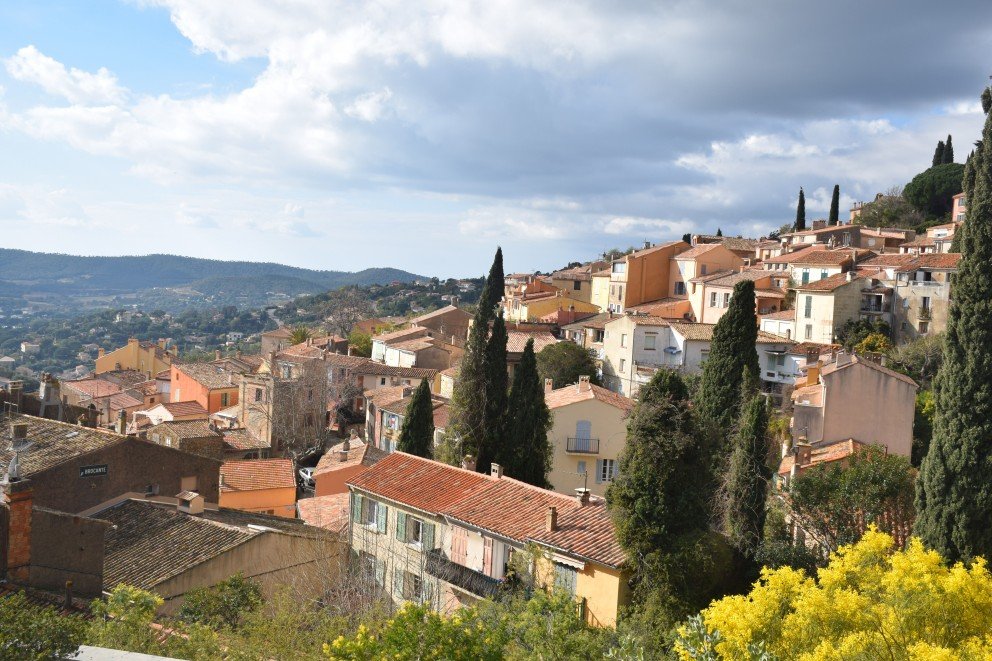 An excellent and appropriately named beginning to the scenic “Route du Mimosa”. Bormes-les-Mimosa is separated into the lower port town, and the upper medieval village.  Make sure to visit the port (Pradet harbor) first for views of the Iles d’Or, the Cap Bénat and the Cap Nègre before you continue the route upwards.  If looking for a hike or a dip in the water, a venture to the Plage du Port du Pradet is well warranted.

Counted as the most beautiful floral village in France (Le plus beau village fleuri de France) and the headquarters for the Mimosa plant, the residents added “les Mimosas” to their town name in 1968 in honor of the golden tree.  Wander the narrow streets and enjoy the atmosphere.  Reportedly, there are no less than 90 Mimosa plant species in the village.

Make sure to walk along the ancient ramparts and the old village center with its Chateau des Seigneurs de Fos.  Pay a visit to the “Pépinieres Cavatore” as you leave town and pick up your own Mimosa plant from among the over 150 varieties available (closed lunch time and Sundays). 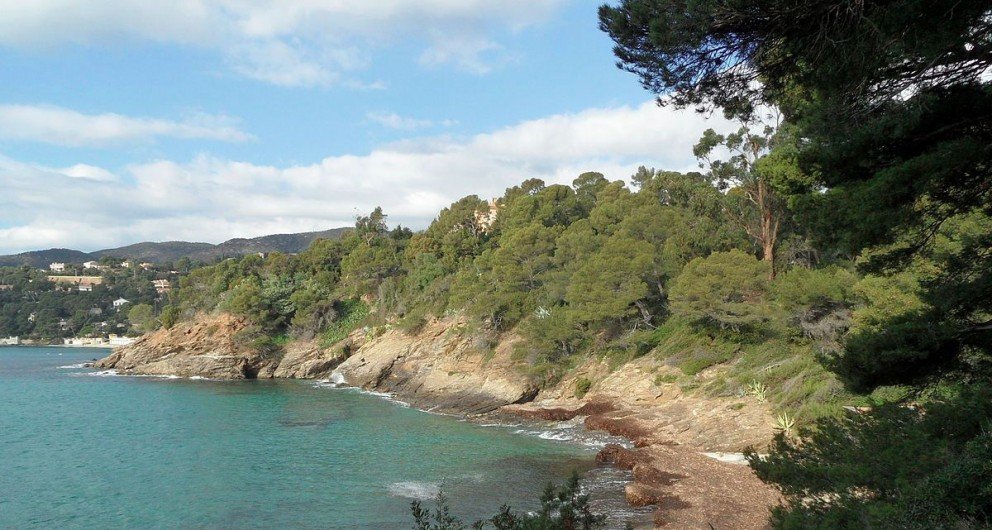 Imagine the Massif des Maures plunging into the crystal clear waters of the Mediterranean… The beautiful commune of Rayol-Canadel is actually composed of the joining of two villages (Le Rayol and Canadel) in 1945 and is situated along the coastal D559.  The highlights are not only the plentiful Mimosa blooming in and around the large villas, the gardens of the private estate Domaine du Rayol (considered one of about 30 official “Grand Sites of France”), but also its seaside location and beautiful beachfront with views of L’Ile du Levant and L’Ile de Port-Cros.  A popular seaside destination for families since the 1970’s.

Named after a saint (Sainte Maxime of course!) by the local monks of the 7th century, the small village with its many beaches is popular with tourist and families in the summer months. Located on the gulf of Saint-Tropez, it boasts 11km of beautiful beachfront with restaurants, brasseries, and plenty of boutiques to tempt you.   Wander around town and you will notice remnants of Art Deco architecture, decadent villas, and lovely shaded squares. For the Barbar lovers out there, author Jean de Bruhoff spent much time here and found inspiration to write his childrens books.  You can spot the local beaches in at least two of them – his first book “Barbar” and “Le Voyage de Barbar”, and in fact one beach has been renamed “Plage des Elephants”.  In February Sainte Maxime has its own “Corso du Mimosa” parade with Mimosa floral floats. The local flower garden, Jardin des Myrtes, is a pleasant quiet  stop and let the youngins run wild and free. 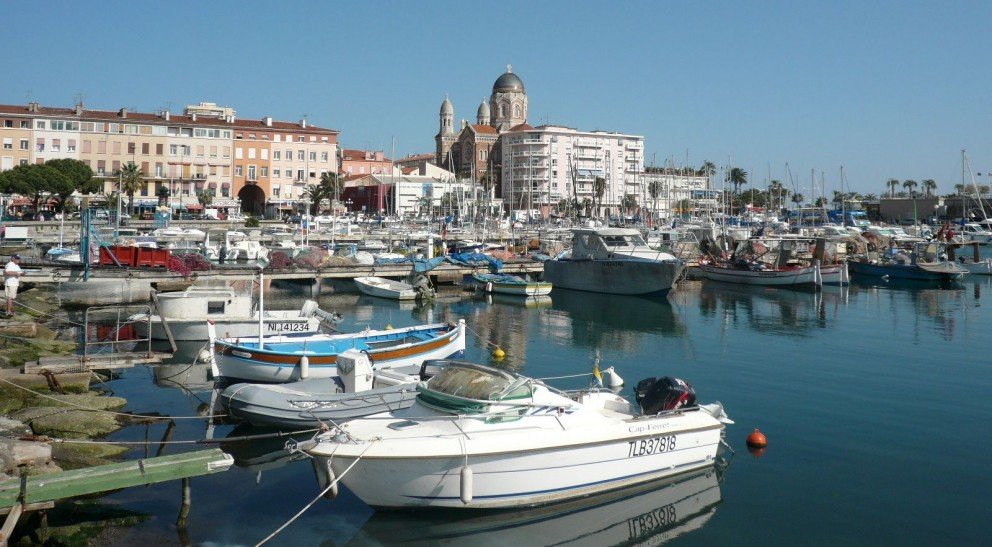 Near the Roman town of Fréjus with its vestiges and ancient church, the port town of Saint Raphaël is located right on the border of between the Var Department and the Alpes-Maritimes. The immense seaside church “Basilique de Notre Dame de Victoire” built in 1882 is a must see item in Saint Raphaêl, as is the Musée d’Archeologie with its displays of rare objects discovered during underwater excursions.  The “Promenade de l’Espace Bonaparte” (he came through here after his tour in Egypt) makes for a pleasing ocean side stroll.  Blooming Mimosa can be found growing on the beautiful beaches nearby.  There is a full 36 km with 29 separate beaches (of interest for diving and snorkeling), so if you struggle with decision-making this might get quickly complicated.  Choose wisely as some of these beaches are of difficult access…

The section from here to Tanneron is probably the most scenic part of the “Route du Mimosa”. Considered the Mimosa Capital (in competition with Bormes-les-Mimosa) and entrance to the Massif Tannneron, its hills are covered with the largest Mimosa forest in all of Europe.  In February there is a Fête du Mimosa, Corsos Fleuris (battle of the flowers), and a nighttime illuminated parade.

The town is best known for the Château de la Napoule, a picturesque fortified castle that sits right on the water.  Much of the castle was destroyed during the French Revolution (hélas, just like so many other historical monuments).  All that remain of the original structure is the 4th century Roman Tower and the 11th century Saracen Tower.  Don’t miss the amazing sculpture hanging off the tower, and the carvings along the beach. Now a non-profit for the arts, much of what you see today is the renovation work of a rich American couple who purchased the property in the early 1900’s.  You can walk along the castle walls and onto the neighboring city beach. 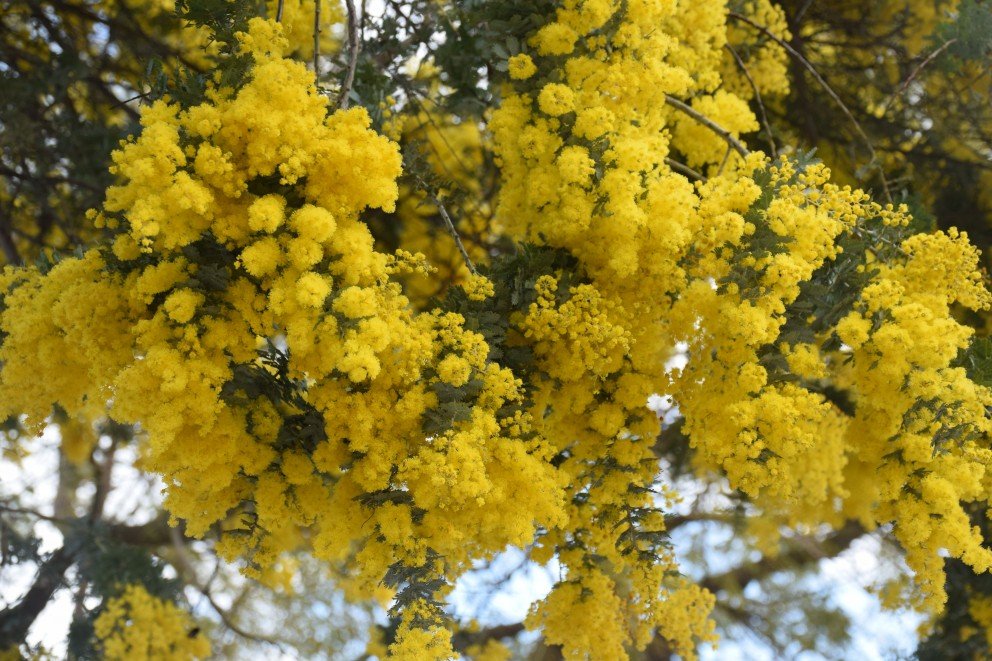 Located right smack in the middle of the Mimosa Forest at the tiptop of the Massif du Tanneron. Expect amazing views dotted with burst of yellow everywhere. This is the ideal starting points for biking and hiking through the mimosa forests.  There are shops to peruse and several nurseries open for you to find out how the budding branches are forced into bloom.  If you cannot visit the entire route, this is great choice is you can only stop in one village. 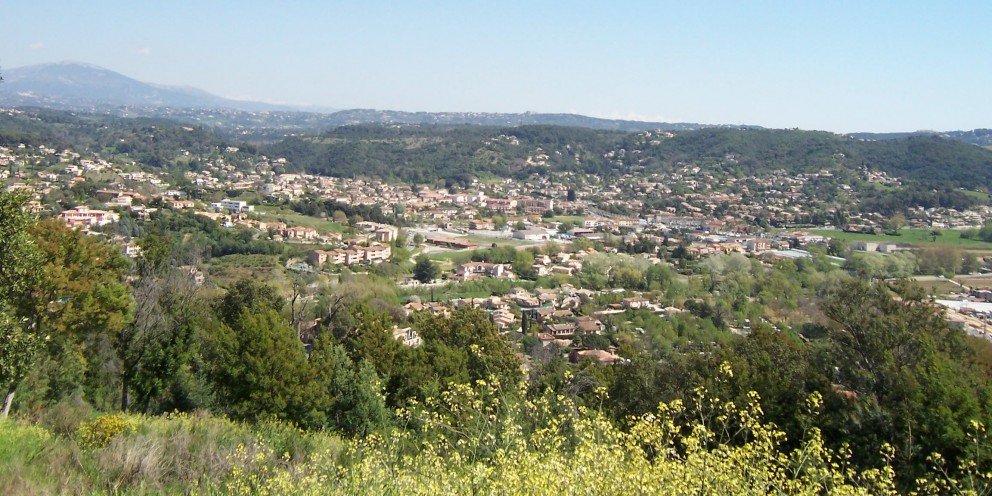 A small town nestled in a valley surrounded by hills full of those lovely trees with yellow fluffy scented poufs that are the celebrity of the day.   This is the home of the “Confrérie du Mimosa” created in 1998 to celebrate and educate others about the virtues of Mimosa.  There aren’t enough reasons to make this town a mandatory stop on the route, but you can wander about town to admire the plentiful blooms and valley views while sampling a brioche with Mimosa cream…that’s my plan anyways! 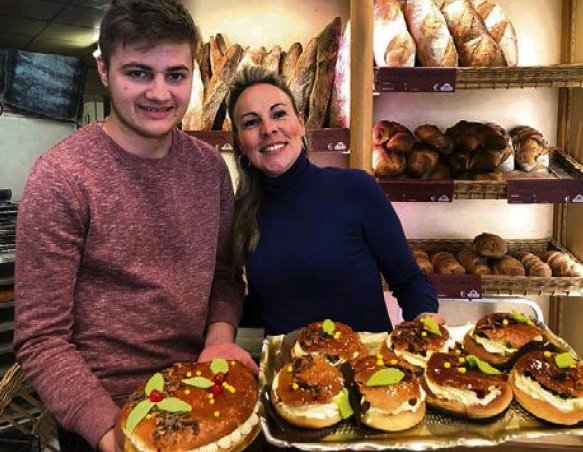 Or, skip it altogether and visit instead the tiny nearby medieval town of Auribeau-sur-Siagne… 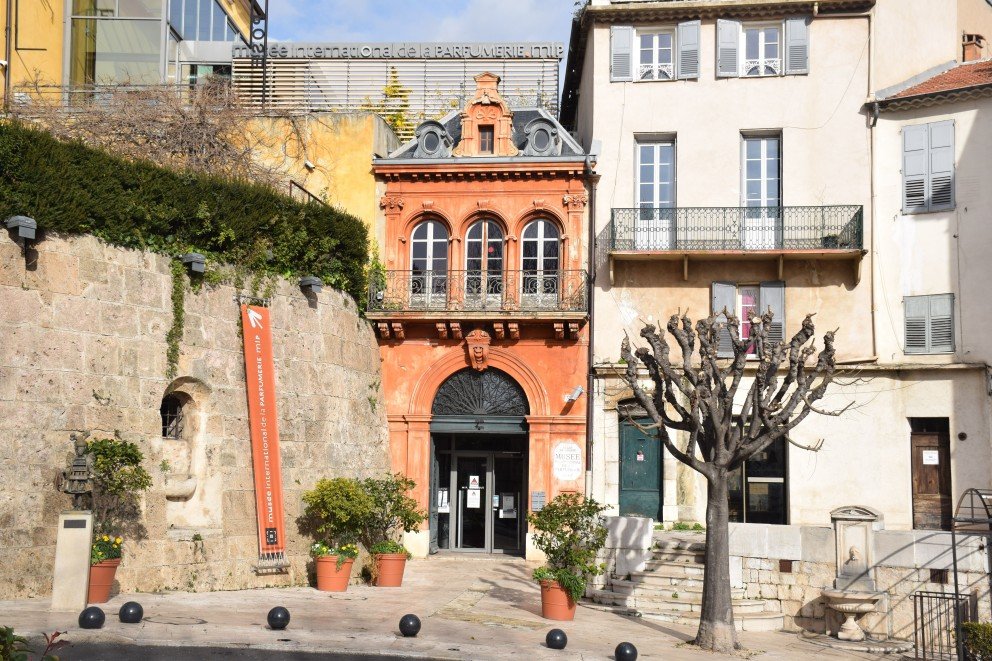 Your last and most “fragrant” stop of the route. The old town center in Grasse is a collection of large and small squares, narrow alleys, steep staircases, and 17th and 18th century architecture.

Grasse is known as the fragrance capital of the world for good reason.  The flowers necessary for perfume making are all grown in the surrounding mountains, including of course Mimosa. In fact, fragrant Mimosa oils are found in the perfumes “Paris” by Yves Saint-Laurent and “Champs Élysées” by Guerlain.  There are three world-famous perfume factories worth visiting: Fragonard, Galimard and Molinard.  You can even follow a mini course at one of the factories if you like and mix up your own perfume fragrance!  In addition, Grasse is the home of the “Musée International de la Parfumerie” and its “Jardin du Musée” gardens which explore the history of perfume making that dates back to the end of the 18th

Heads up, I have one more treat in store for you my cyber friends!  A Mimosa picture tour for you to feast your eyes, in case you are stuck elsewhere and can’t make it out here. Sharing is caring after all! 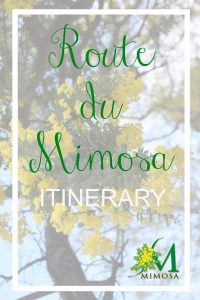