Winter Blues? Bring a little sunshine into your life!

by Girl Gone Gallic on February 6, 2017 in Destinations, Food • 0 Comments 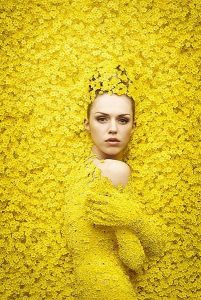 Grey skies getting you down?  Ain’t no sunshine???  Feeling a little more tired and moody?  Lost your “get up and go” and the “pep in your step”?

What could be better to brighten even the darkest dreariest winter day than 130km (80 miles) of bursting scented golden poufs? So much better than popping Vitamin D pills or hiding under the blankets until spring!  A guaranteed surefire way to bring a smile to anyone’s face.

PS – Chocolate is scientifically proven to help as well, so indulge all you want with a clear conscience!

Early spring brings the blooms of the famous Mimosa trees to their full splendor on the hillsides of Provence and the Côte d’Azur.  They are quite a spectacular sight to behold particularly if you are lucky enough to happen upon them on a sunny day with bright blue skies – the contrast is striking.  Add to that the intoxicating fragrance to tickle your nose, and heaven you have found!  Just don’t pick any of that heaven, or you’ll have the locals to contend with… 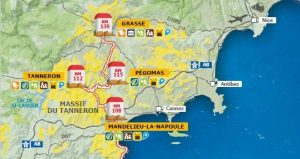 The “Route du Mimosa” (or Route d’Or as it is sometimes known) begins in appropriately named village of “Bormes-les-Mimosa” and extends to the fragrance capital of  the world “Grasse”.  Blooms are apparent from January through early March – but if you plan to visit aim for mid-February to benefit from the most blooms and the various festivals that accompany nature’s spectacle.  Ready for some golden adventures?  Keep posted for the full itinerary with highlights and tips coming up in my next blog post “GGG’s Route du Mimosa Itinerary”!  Until then, read on… 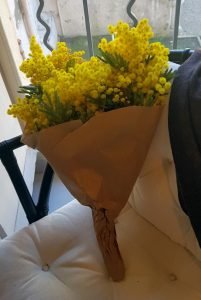 Bouquets of Mimosa aren’t super long-lasting, but they are inexpensive and so bright and joyful that it seems a crime to refrain.  If you don’t have time to pick up your own along the route, most of the markets of Provence and across France offer inexpensively priced bouquets for you to take home or enjoy in your hotel room. Another alternative is to order blooms online (France only) from a local producer such as www.vial-tanneron.com or www.directmimosa.fr.

To extend the life of your blooms, try putting them in lukewarm water with a penny (or euro centimes) and avoid keeping them in too warm of a room. Unfortunately, cut mimosa blooms will only last three or four days. Still, they are a fleeting ray of sunshine in winter to be much appreciated.

It is THE flower of the Carnival de Nice parades. 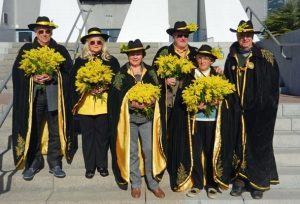 The « Mimsistes » (name given to those who grow and Mimosa commercially as a cut flower) are responsible for shipping 8 million bouquets all over the world.  For this they must force the blooms in greenhouses beginning in November.  Blooms are cut and formed into bouquets, treated, and are then placed in temperature and humidity controlled greenhouses to accelerate their blooming.  Typically, the first blooms are available for Christmas to be used as table decorations. 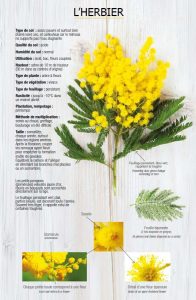 Brought to England from Australia by the expeditions of Captain Cook where it struggled to survive, it made its way to southern France in the 1880’s with the vacationing rich.  The Mimosa tree has since become emblematic to the French Riviera with its glorious pop of color seen across the rolling hills of Nice, Cannes, Antibes, the Massif du Tanneron, Massif de l’Esterel, Massif des Maures, and the Italian coast. Unlike the invasive Scotch Broom found worldwide, this is a welcome addition.

Many festivals and events (like the 2CV rally) promote the scented blooms and are concentrated mostly around the “Massif du Tanneron” in what is known as the “Triangle d’Or”, or the golden triangle.

Plants have feelings, too!

Although there are many varieties (1200 worldwide), the most common Mimosa to be found here is a wild bushy tree that stands up to 10 meters in height (32 feet) and lives for about 50 years.  The fragrant flowers are golden poufs, kind of like a tiny yellow cotton ball or pompom. There are also varieties that come in other colors such as white and pink.  The tree blooms last up to 40 days.

The never-ending sunshine and well-drained rocky soil found of the Côte d’Azur is the perfect home for it to prosper.  Interestingly the plants normally do not bloom in the winter.  They have kept their internal clocks, blooming when they would have in their native country of Australia (their seasons being opposite to ours). 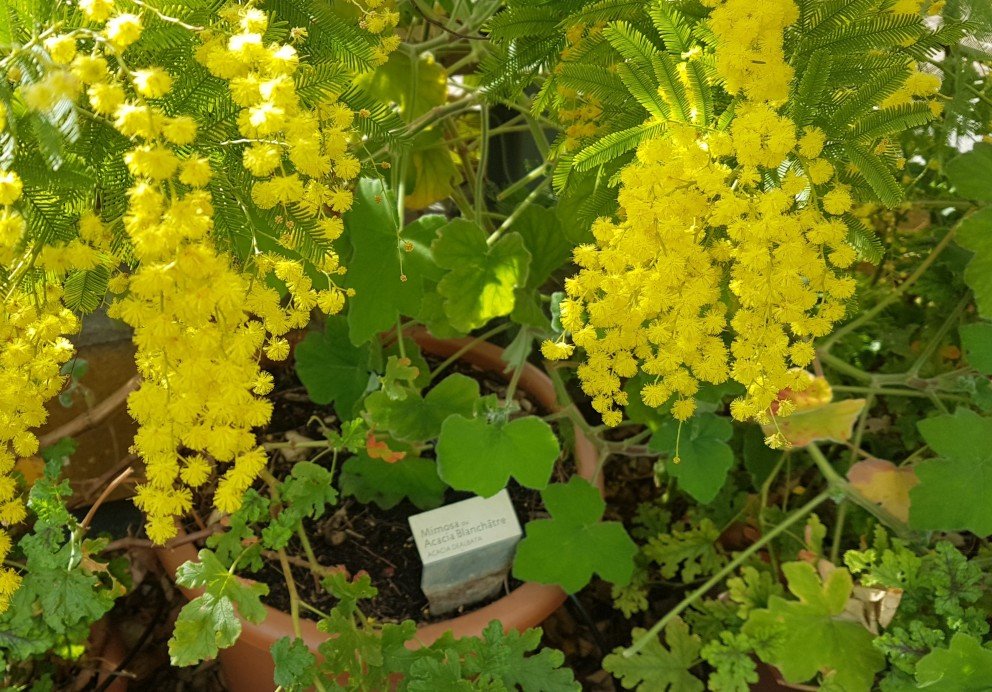 The common name “Mimosa” refers to the botanical name “Acacia Mimosaceae” of the leguminous plant family.  The varieties most grown in the area are “Gaulois”, “Mirandole”, “Floribunda”, “Toison d’or”, “Quatre saisons” and “Clair de lune”.

Not to be confused (although I was and I am very disappointed they are not actually related) with the “Mimosa Pudica” which comes from the latin “mimus” meaning movement.  It refers to the folding action the leaves take when lightly touched or exposed to the heat of the sun (or a bic lighter).

OMG I soooo want to try this… 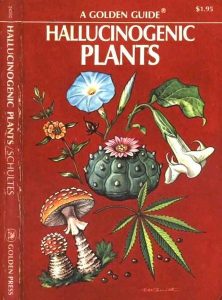 Here’s what I’m NOT going to try…

In Eastern Brazil, several tribes employ the root of the Mimosa hostilis (tenniflor) or Mimosa uerrucosa in the preparation of a “miraculous drink”. In an ancient ceremony, warriors ingest the potent drink bringing them “glorious visions of the spirit lands” and the “clashing rocks destroying the souls of the dead” or the “thunder bird shooting out lightning from his head”. 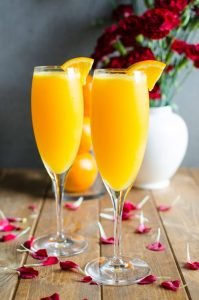 Recipe makes 2 cocktails (because it’s never fun to drink alone!).  Swap the quantities around for the juice vs champagne is you want a slightly stronger cocktail.

Much safer than and way less scary than the above “miraculous drink” mixed up by the indigenous folks in South America!

A few more recipes for the adventurous…

Make sure to confirm the variety you are using for the jelly is food grade and without pesticides.  You wouldn’t want to accidentally give Grandma hallucinogenic jelly on her toast!

Try using in your favorite jelly roll cake recipe instead of the standard raspberry flavor. 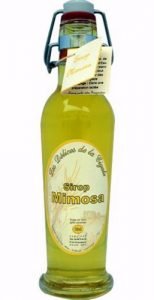 
Mix the water and lemon juice/zest, and then pour over the Mimosa blooms breaking them up with your fingers.  Macerate overnight.  Filter the mixture through cheesecloth, pressing the mixture to recuperate the maximum amount of liquid.  In a saucepan, combine the macerated and strained flower water plus the sugar, bringing to a slow simmer.  Simmer for 5-10 minutes or until slightly thickened, then strain again.  Pour into bottles and keep in refrigerator for up to 1 month.  Use in cocktails (Mimosa Kir), sparkling water, and over ice cream, or stirred into yogurt (plain or lemon flavored). 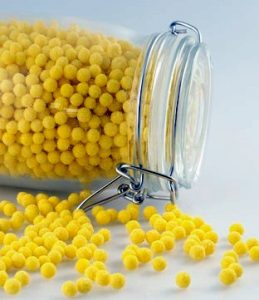 A perfect way to brighten up any dessert while adding an elegant and delicious touch.  Easy to make, try using the crystallized flowers to decorate muffins, cakes and pastries.  Crystallized flower recipes date back to the early 18th century, and the process is always the same whether for making crystallized violets, rose petals, or these Mimosa pearls. 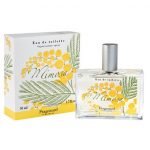 L’Occitane makes a lovely “Mimosa Eau de Toilette” with a fresh sunshiny scent – just like a bouquet of Mimosa but available all year.  Mimosa dreams forever…