How safe is Paris for tourists ?

How safe is Paris?

I often get asked how safe it is to travel in Paris. So is Paris Safe ? Well, yes.  Really, it’s just like in any other big city.  Take a few precautions, keep your wits about you, and all should go well.

While crime in the United States has been on a down swing since 1993, violent crimes still are much higher than in virtually all other developed countries including France.  And although the general crime index comparison between the United States and France is similar, the actual crimes that do occur are quite different.  This is probably a cultural difference – the right to bear arms is important to many Americans and included in the United States Constitution, while in France there are strict gun control laws and it is uncommon for anyone to own a gun.  The crimes that do occur in France are more likely to be petty thefts, property crimes, and (sadly) racial crimes against immigrant populations.

Personally, I have never had any safety issues in all the years I have been traveling to Paris (and I’ve been there a LOT, starting in my twenties and to this day).  I even sent my youngest and his friend there a few years ago.  They explored and experienced Paris over a two-week period, returning by RER to a friend’s home outside of Paris each evening.  Everything was well planned and orchestrated ahead of time, and they never had a problem.  The experience was so enriching and rewarding that they still talk about to this day.  I am a great believer in travel for youth – it’s such an eye opener for them.

To recap on how safe is Paris, all of France is relatively safe with most crimes being non-violent. Pickpockets are by far the most significant problem in Paris, with violent crime being relatively uncommon in the city center.  So don’t be intimidated by any stories you might hear. Just stay aware of your surroundings, secure your valuables, and use common sense.  Be particularly careful in very touristy areas of the capital.  For example, resist the urge to pull out your cell phone while on the metro to look at your latest photos in case someone should decide to snatch it away and run off at the next station.  Should anyone suspicious approach you, just don’t answer and keep walking.  Don’t stand there dazed by the magnificence of Notre Dame while completely forgetting your surroundings and your belongings.

…and if at all possible, please try your best not to look like a tourist ! 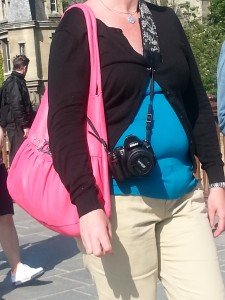 In the unlikely event that you do encounter a situation, go to the nearest “GENDARMERIE” (Police Station) to report the incident.  The report can be used to file a claim with your insurance if necessary.  If your passport is stolen, contact the embassy for a replacement:

Travel is such an enriching experience, and with proper preparation and planning there is no reason to let worry ruin your vacation.

Be Aware. Be Safe. And you won’t be a Victim.