There’s something “fishy” going on in France…

Should you see anyone come this April 1st with a paper fish pasted to their back, don’t call the psychiatry ward for a pick up. Really! It’s just another one of those slightly incomprehensible holidays that you find in France (and other countries such as Belgium and Italy). It’s April Fool’s Day, or Poisson d’Avril (April Fish Day ) as it’s called in France. A similar idea happens on April 2nd in England and Scotland, called “Taily Day”, this time with paper tails or for the more mean spirited folks out there, a “Kick Me” sign.

Here’s how it goes : 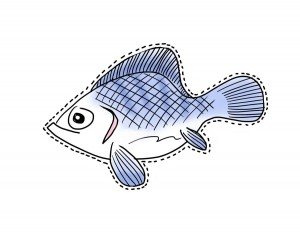 It’s particularly fun when you are able to paste several fish on someone’s back… a great work prank that I highly recommend, especially for the folks that don’t know about the custom as they are such easy prey. You can pick on one poor soul and get everyone else in on the prank – don’t forget to take lots of pictures (to send me!) and let them go out in public with their fish collection safely flying in the wind. Just blame your mean spirited fun on the French if you get caught…

This was also one of my Dad’s favorite pranks, and we routinely played all day long with those ridiculous fish pasted to our backs. I could deny it ever happened, but there are sadly way too many photos to attest to this fact.

To soothe our egos, I wish I could say we could look forward to the chocolate fish available in the pastry shops during this time of the year. Unfortunately, those are mostly just for Easter in our family (along with flying bells – a whole other bizarre tradition).

Back in the day when postcards where regularly sent through snail mail to loved ones (late 19th to early 20th century), April Fool’s day versions were very popular. The postcards usually featured fish in the starring role, hand tinted and set softly hued scenes. With the passing of time, as the fish symbolizes remembrance and secret feelings, the postcards were sent anonymously by secret admirers leaving the recipient only their imagination to determine the sender. The Edwardian’s preferred pears in the starring role, just as strange if you ask me !  Sometimes the postcards teased the recipient they were addressed to, and were just for fun.

“Full of joy, I send you this message”

“Guess who sent you this, and you will know who loves you”

“I would like to win over your heart, to give yours to me, and mine to yours, myself to you and you to me.”

My brother (Yankfroggy) modernized the postcard idea and got me (and everyone else in our family) with a virtual fish on our Facebook accounts.

The origins of the holiday are obscure, with no conclusive evidence or resolution to the question.

The most popular explanation claims the tradition dates back to 1564 when the French King Charles IX decided to formalize the date for New Year’s Day back to January 1st, a date that had previously been abolished as pagan. Until this decree, New Year’s Day was celebrated on different dates in different regions, but most often celebrated on March 25th for the feast of the Annunciation.

The idea follows that back in the days before internet and instant messaging, some of the harder to reach villages didn’t get the calendar update. So the villagers continued to celebrate on March 25th (or other date).  As such, the “in the know crowd” savored in the villagers mistake, teasing, playing pranks, and making fun of them.

Unfortunately, “Poisson d’Avril” seems to have existed before this date so this is somewhat unlikely. Whatever the origin may be, nothing is really new and some of the “influencers” to the custom include the Roman Festival of “Hilaria”, and the Medieval Feast of Fools. 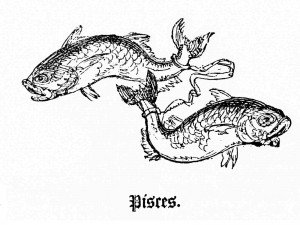 So why the fish you ask ?

Perhaps because it’s the Zodiac sign for April as some claim, or perhaps it is because fish was a traditional gift for the April version of New Year’s Day as it was the end of Lent. Stories suggest that real fish used to be attached to people’s back; the voluminous clothing of the time kept them from noticing immediately. Thankfully this has evolved to the paper fish that we know today, although my brother did once mail a real fish to a friend which was seriously stinky and slimy on receipt.

Poisson d’Avril is of course in direct relation to the April Fool’s Day pranks we know in the United States and other countries. The French (and all of humanity) have been playing pranks on each other since the beginning of time, but the French paper fish seem to date to the mid 1600’s.

The French really do have a great sense of humor…

One year, the SNCF (France’s train network) used Homer Simpson’s voice to make all their announcements in the train station.

There is also a town in France called “Poisson” (fish) , and a town called “Avril” (April). So of course, the mayors of the two towns got together and sistered their cities so they could order signposts reading “Poisson d’Avril”. Just imagine, a whole town with people running around town with paper fish on their backs! What fun, I think I may have to visit…

“Do you think he noticed?”

During the recession, reading the job ads…

“If you give a man a fish he eats for a day, if you give him one for April Fool’s he will laugh all his life.”

So this year, why not print out a fish and join in the fun ? Send me some pics and I will add them to the photo gallery above !