Corsica is a magical place…

Corsica is uniquely beautiful, dramatic, and largely unspoiled by the masses. There is something so very special about this island tied to France, and is in my opinion one of the most special destinations in the Mediterranean.

From the sapphire blue sea to the highest mountain, the landscape is rich and varied. The people are fiercely independent and proud.   This is not your typical French experience; even the government understands this and gives Corsica a little extra leeway. Corsica is as authentic and unpretentious as it gets.

There is so much to share about this amazing place, I am going to create a short series on Corsica, with my recent experiences, a photo gallery to get you seriously motivated to visit, a listing of the top things to do and see, and finally the practical travel stuff to help you plan your own trip (and now is the perfect time to travel Corsica!).Here is part one of the journey, enjoy!

Listen to this clip “Corsica” as interpreted by Corsican native “Patrick Fiori” sung in perfect duo with megastar Patrick Bruel and you will immediately get a flavor for the indigenous people of Corsica. It is an adaptation of the song composed by “Petru Guelfucci”.  The song was filmed in the village of Carcheto-Brustico, in the heart of the magnificent Orezza Valley.  The song relays the emotional story of two brothers consecrated with the difficult task of raising and protecting their deceased brother’s daughter.

Corsicans are a proud and fierce people. They have to be considering everything they have been through – such a beauty of an island has always been desirable and fought over throughout the ages.

The terrain is as tough as its people – rocky and craggy.

Corsicans have survived the pest (leaving two-thirds of their population underground), the world wars (with significantly more lives lost in comparison to the mainland), and fires burning much of their land. Their quest for independence (the national liberation of Corsica) has created tensions and political unrest between the nationalist and those that supported the mainland. 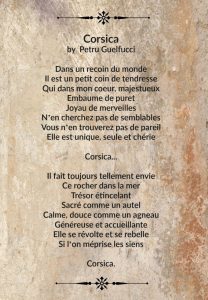 They have emerged intact but hardened with plenty of attitude and distrust towards strangers and those outside their clan. Blood feuds were very common in the 1800’s in the primitive feudal community that it was, taking 4200 lives through family vendettas between 1821 and 1852 (or about 5% of the population). 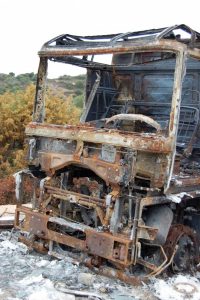 Blood feuds are not completely a thing of the past in Corsica. Families continue conflicts started long ago, just with a little less of the blood part. Mysterious bombings and fires are not uncommon as a way to settle disagreements. Occasionally you will see burned cars on the side of the road, so be careful about upsetting anyone while you are vacationing there! I came across a few burned cars in my travels, and a spectacularly burned truck full of merchandise. Thankfully no one was hurt, as is usually the case. 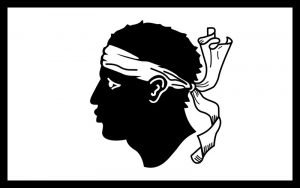 Corsicans are very much attached to their land, and foreigners trying to purchase homes and settle in Corsica will often receive polite notices to leave their homes or they will burn it to the ground. My uncle who inherited land from his Corsican grandmother was never able to claim it as he was born and has always lived in mainland France. Each request to file his claim on the land magically disappeared with no trace…

Let’s not forget the Corsican mafia either, it is rumored to control the better part of the famous “Cours Mirabeau” stretch of restaurants and shops in Aix-en-Provence. From what I have heard, owners must pay up or have their restaurants put in jeopardy. The “Pasino” also in Aix was the stage for a full machine gun episode a few years back for which the hearsay is the Corsican mafia is to blame. 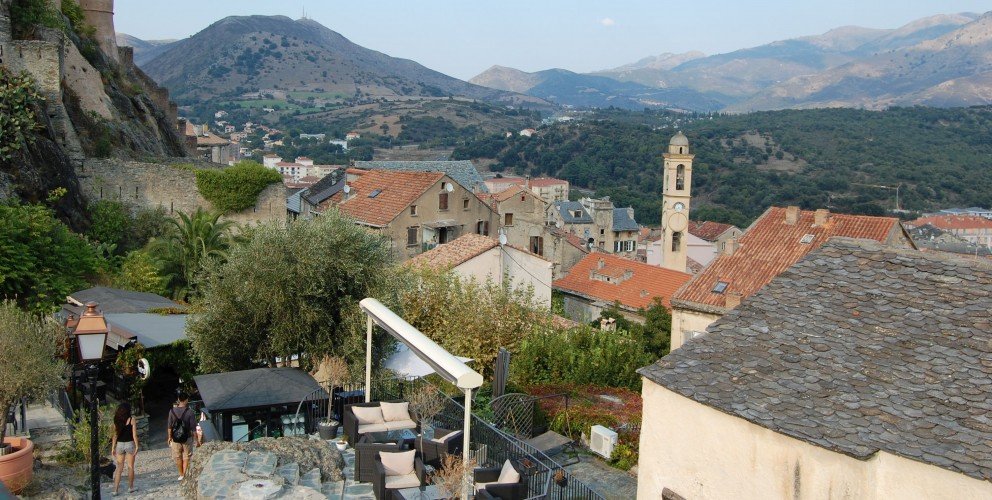 Corsica has strong Italian roots, not surprisingly since it is closer to Italy than it is to France. The dialect is a spin-off of Genovenean, called “Corsu”.  Corsu was THE language in Corsica until 1859, alongside Italian. Although the island was acquired by France back in 1768, French only became the primary language gradually over time and establishing itself permanently after the World Wars. Today, very few Corsicans still speak Corsu, it is primarily only the older generations found in tiny villages in the back country. 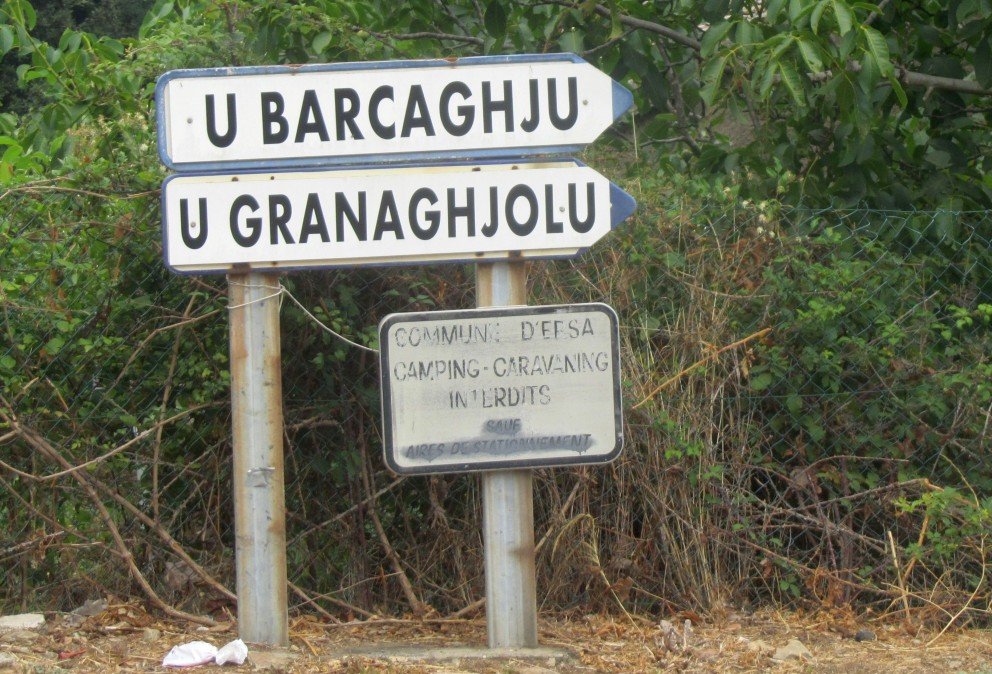 Of the over 300,000 people who inhabit the island today, only half have a rudimentary knowledge of Corsu, and just 10% still speaking the language fluently as a first language.  The one and only exception to this is the Corsican mafia, who still prefer to converse in Corfu for obvious reasons.

I have a few clients in Corsica (La Corse), so I am lucky enough have an excuse to go over there from time to time, which of course I never let pass. Working in Corsica is a little different from mainland France , the people are very friendly and agreeable – but the follow through isn’t always the best. I think they just want to be agreeable and not disappoint you directly to your face, so it’s hard to know what is going to stick and what isn’t. They also prefer to work with locals rather than outsiders which definitely leaves me out, similar to what I experience when working in Monaco.  Not the easiest place to do business!

Sand on my arms, salt in my hair, the sea at my feet….

However, any difficulties in working there are quickly surmised by the surroundings. The undeniable beauty of the environment and the accessibility to beaches and mountain springs always quickly make me forget any disappointments that I may have had in my business dealings. 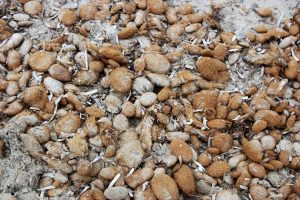 In fact, don’t tell anyone, but I always wear my bikini bottoms under my business suit so that at lunch time it’s a quick change for a dip into the clear waters. Actually, if you look very very closely as I try to be quite careful, you will likely see a grain or two of sand peeking out from underneath my business attire… or perhaps a glistening of dried salt deposited across my forehead.

Corsica is a land of contrasts, and one of the highlights is being able to hop from sea to mountain at will. Where else but in Corsica can you go from ocean to mountain top in just 30 minutes??? The island itself when seen from above looks much like a left foot with the bid toe protruding out (the rugged 25 mile long “big toe” part is known as the “Cap Corse”, with the city of Bastia at its base).

The many faces (or toes) of Corsica…

…I really need to find time to paint my toenails.

The west coast is the more wild of the island, the eastern coast flat with long stretches of beach. Scuba diving is awesome anywhere on the island, but particularly spectacular in the southern half. Most divers revel in the diving possibilities around the marine reserves: The Cericales Islands, the Lavezzi Islands, the archipelago of Finocchiarolo, and Scandola. 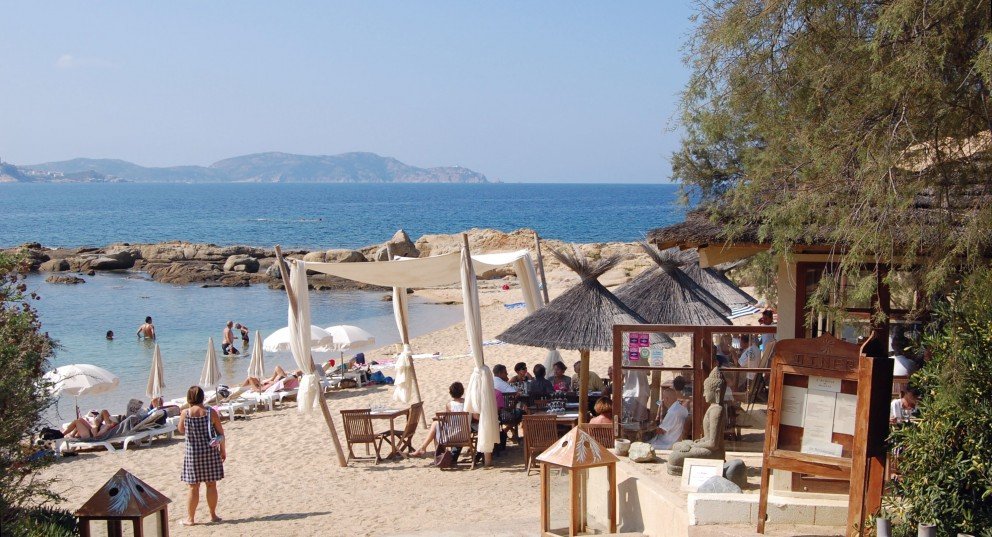 For all you sun-seekers out there, the beaches are the obvious first places to explore. Corsica has over 600 miles of coastlines, with hundreds of beaches hidden throughout. Clear blue skies, transparent water, dramatic cliffs…it’s hard to go wrong. You can pick up the multi-language guidebook “Guide des plus belles plages de Corse” by Marie-Hélène Ferrari on Amazon as a helpful beach finding tool if you like, or try the website PlagesTV or Corsica Experience.  If all else fails, here is a short list of my favorites: 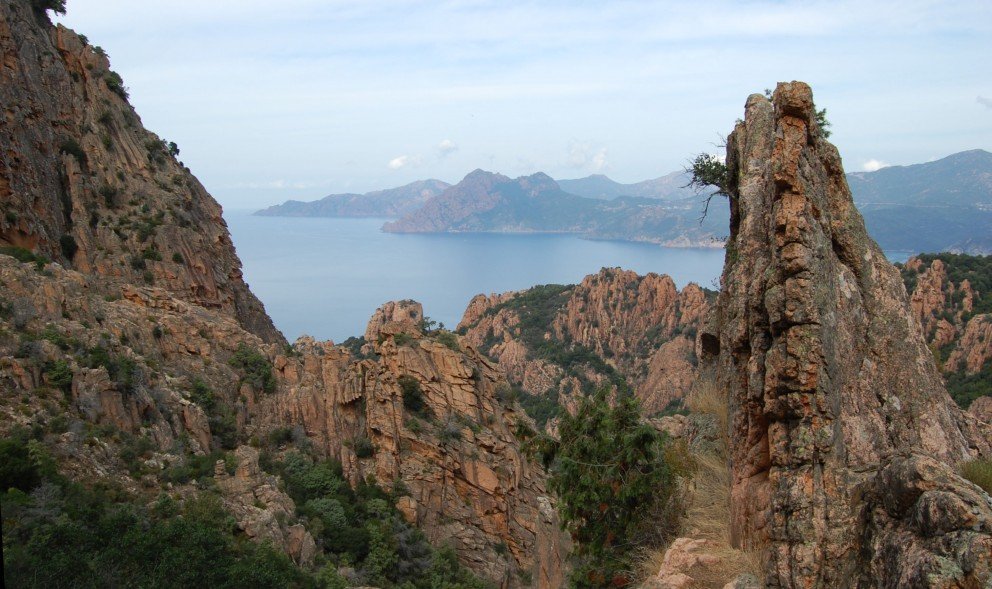 Once you tire of the beaches (and it might take a while), Corsican mountains are a perfect way to escape the heat and the invading tourists of the summer months. The scenery is spectacular, the air is cooler, the crystal waters of the rivers invigorating and the pine forest scents the air you breathe. One of the particularities is the tiered rock pools in the Spelunca Gorge which are one of the top “must do’s” of the island. The spectacular Cascade de Piscia di Gallo waterfall is also another site not to be missed.  Believe it or not, the highest mountain peaks (Monte Cinto is 2710 meters) are still covered in snow in the summer months.  If you like getting off the beaten track, it’s in the remote mountain villages that you will get a better sense of Corsican culture. 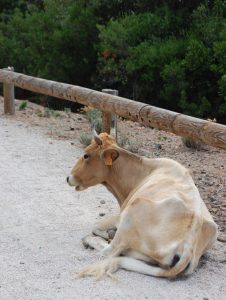 To get there, you are going to have to be brave, very very brave…

Why, you ask ?  Well to start with, there are the narrow winding roads and hairpin turns off precarious cliffs. Then, there are the random napping wild cows that you might encounter in the middle of the road. There is also the complete lack of signage in some of the furthest corners of the island (is this is on purpose ???). I got pretty lost once but figured it is an island after all, and eventually I hit ocean. Finally, there are the locals. Remember, Corsica has close Italian ties and if you have ever driven in Italy you will know exactly what I mean. Give wide berth to any cars with Corsican driver’s license plates… Driving here is not for the faint hearted.

From Virtual to Reality

So start planning your trip today to travel Corsica, and let yourself be dazzled by the rocky coasts, beautiful bays, hidden coves, plunging cliffs, jaw dropping gorgeous beaches, and the hundreds of miles of magical Corsican coastline.

As always, feel free to reach out if you need any advice! 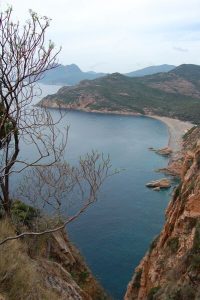